That was where the nightmare found me

Contrary to popular belief, I see the brain working together, undivided between its left and right sides. It is overlaying its creative and analytical functions in every task. There are compositional problems to resolve, and color combination methods to gauge when you are painting a picture, at the same time that you are chasing your muse. The same is true for writing a story or composing a piece of music, with the added effect of time: a painting is perceived at once, more or less, while music and story unfold for the listener one note at a time.

I paint with a pen, write with a paintbrush. My art strives to tell a story, and my stories strive to bring you into the scene being painted! Here is a good example of the mutual influences between art and writing. I painted this oil painting a few years ago, driven to do so by a recurrent nightmare. A few months later I brought it to life in words, and weaved it into my novel, My Own Voice:

Just yesterday—when I laid there in bed, bleeding all day, not even knowing where I was—that was when at last, the dream found me.

In it, I find myself in a public place, which is strange to me—even though I know, somehow, that I’ve already been here. I’ve visited this place, perhaps the night before.
It’s raised like a stage, and flooded with light: a harsh glare, which blinds me. For a minute I can’t see nothing in the dark, beyond that ledge—but I know that them faces are out there, blank and blurry. They’re all there, hushing each other, gazing at me.
I see myself standing there in front of them, naked.
Red-faced, I hunch up as tight as I can. I fold over my thighs, trying to hide, to cover my body, my shame—but my hands, they’re way too small, so my nipple slips out of my fingers. And there it is, circled by light, for all to see, and to jeer at me, and to lick their lips, which is like, glistening out there, tiny sparks hissing in the distance.
For a little while, my sleep is light. And so—even as I’m looking straight into that spotlight, or like, reaching down to touch the ledge of that stage—I can tell that all this is false, it’s nothing more than a dream. But then I fall deeper, even deeper into it, and now I really believe what I see:
Some thread is crawling on my skin. Laying across my knees is a strap of fabric, which is frayed and stained, here and there, with my blood. When I pull it in, trying to drape it around me, or use it for a blanket, it resists. It don’t hardly give in, ‘cause it’s tied to something—no, somebody—standing right here, directly over my bare back.
Me, I don’t want to turn, but I take a peek over my shoulder. Wrapped in layers of rags and straps and loose ends, all of which is tattered and like, drenched in reds and browns, the figure seemed shaky. He lifts one leg, and tries to balance himself, teetering—this way and that—on one foot. His hand tries to touch the back of my neck—and misses it, grabbing a handful of air, instead.
And his blood-red lips, they’re curled up, in something that looks an awful lot like a smile. A mocking smile, one that don’t change.
In my dream, my feet must have frozen. I can’t move, can’t run away from him, or even climb off the stage, because at that point I’m weak, and too scared to even breathe, and because of that thread, which binds us. And so, rooted to that spot, I look up at him. At this close range, our eyes meet, and my heart skips a beat, ‘cause at that second, his are empty.
Suddenly I catch sight of someone else, someone standing way over there, in the distance, behind him; behind the curtains, even. Except for her hand, which is caught in the light, it’s hard to even notice her, ‘cause at first she’s like, real shy, even modest, and keeps herself in the shadows, out of the spotlight.
But then, she changes. Her long fingers, they’re gathered, one by one, into a fist. And twisted around her little finger, you can find—if you focus—the ends of the rags, and the straps, and the thread, all of which extend from there to here, where he stands; all the way, to the joints of his wrists and his elbows, tying them like, real tight.
And from backstage, she’s pulling him—raising, dropping, tightening, loosening—making the puppet move, shake, jiggle, even dance on the tip of his toe, and like, bringing him, somehow, to life. I gasp, thinking: she can twist him around her little finger, if she wants to.
Me, I cringe as he puffs, breathing something in my ear. “Go, go back home, go,” says the puppet, in a voice that is not really his. “Go to the place, the place where you came from, you came from. Go back to your ma, ma, your mama.” 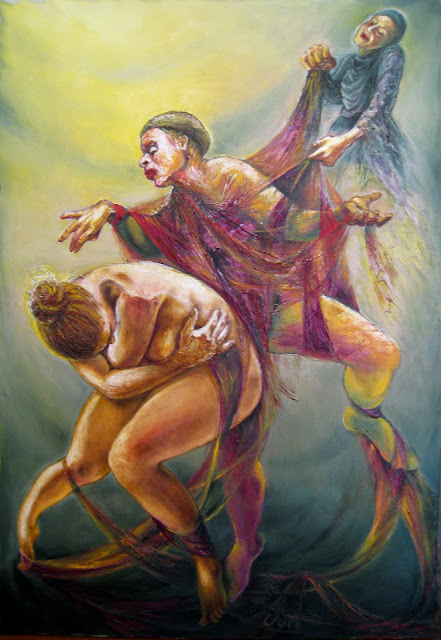 ★ Love Family Saga? Treat yourself to a gift ★ 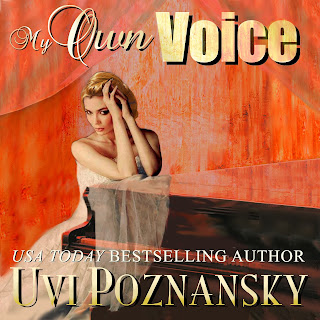 "A literary symphony complete with a cast of likeable, bruised characters"
Posted by Uvi Poznansky at 10:38 AM