Then Saul does the most incredible thing: he hums a tune. in my opinion, it is quite a catchy one! Even so, I have never known him to be particularly musical. On his lips, the notes are bungled. Not only are they out of step with the way you expect to hear them—but they impart a flavor, the bitter flavor of jealousy.
The words sound vague, they are barely expressed—but everyone around us knows what is rattling in his throat.
“Saul has killed his thousands, and David his tens of thousands...”
Is that a threat, glinting in his eyes? I tell myself it isn’t, it cannot be, and promptly forget all about it—until much later.
The king is so jealous that David is forced to flee, and he tries to go to the enemy stronghold, the city of Gath, which is where the Philistine advisers perform their own 'reprise' of the song, mocking him:
Meanwhile, both his advisers take turns jeering at me, flapping the wings of fat under their arms, and raising the pitch of their voices from one phrase to another. “Saul has slain his thousands—”
“And David—”
“And David—”
“Oh, yes, David! What about him?”
“Let’s sing his praise, let’s sing a hymn—”
“For the king of the land—”
“He’s so bad—”
“Let him reign—”
“It’s plain, he has slain—”
“With his own bloody hands—”
“Down there in the sands—”
“With barely a stain—”
“He has slain—”
“Thousands?”
“No, no! Don’t you know? He’s stronger than Saul!”
“Stronger than everyone, big and small!”
“He’s slain tens of thousands!”
“Our walls shake, shake and fall!”
This performance makes everyone burst into laughter. Some of them step forward from behind their podiums, others slide off their benches. One by one, they come down to the center of the floor, and start hopping all about, faster and faster around the circular hearth, and shout my name. The hall fills with echoes of the original tune, performed with a twist of mockery, which makes my blood boil. 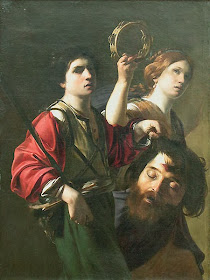