Celebrate freedom this Fourth of July, as fireworks explode up in the sky

Celebrate freedom this Fourth of July
As fireworks explode up in the sky
A time to rise, a time to kneel
A time to cry, a time to heal 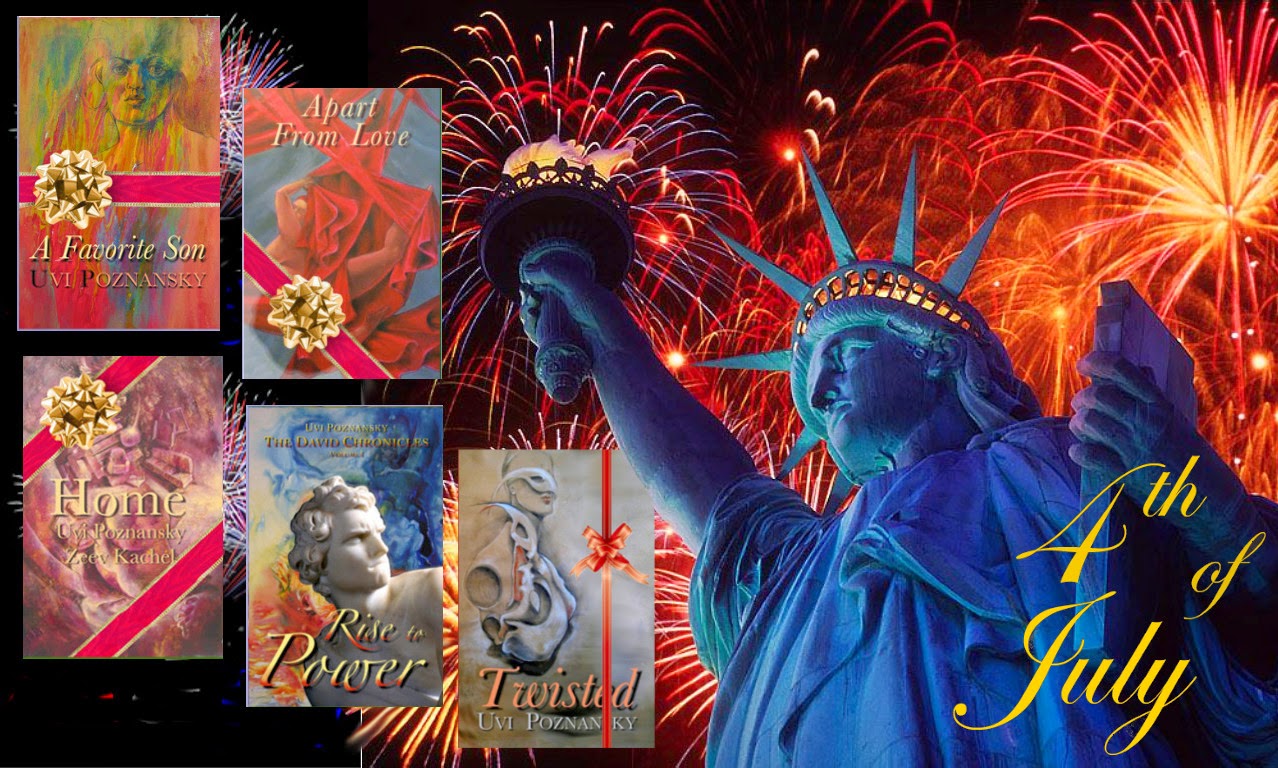 (No Kindle? No Problem! Amazon gives you a free Kindle app)
Posted by Uvi Poznansky at 5:51 PM No comments:

Cover design: A Peek at Bathsheba

My book, A Peek at Bathsheba, includes a sighting of Bathsheba at mouth of a cave, located just above the Kidron valley, near Jerusalem. The setting immediately brought to my mind A Woman Bathing in a Stream, painted in 1655 by Rembrandt, immediately after he painted Bathsheba at Her Bath.

During the history of art, most artists portrayed Bathsheba as a fleshy, mature woman. They often placed her in a lush outdoor scenery, such as a royal garden, with flowing water or with a fountain. Spotting a forbidden woman in a setting reminiscent of the Garden of Eden is a tempting fantasy, and quite a departure from the biblical account, that states she was bathing on her roof. Artists go after their own heart—and so, indeed, do writers—to suggest the emotional essence of the story.

Rembrandt places his figure not in a garden, but in a cave with a pool of water, which is at once an outdoor and indoor scene (and in Bathsheba at Her Bath he presented her in an indoor scene, in her bedroom.)

Unlike paintings done by other artists—depicting Susanna and the Elders, Bathsheba, or the goddess Diana, who were all spied upon while bathing—this painting does not show the peeping man. Instead, Rembrandt supplants him by you, the viewer. Also, the woman in his painting is in control of the situation, rather than a victim of it.

Rembrandt worked mostly with a grays, browns, and blacks, setting objects back by plunging them into this dark tone, and bringing them forward by shining a bright light directly upon them, creating stark contrasts. The resulting image is sculptural in nature, and strikingly dramatic.

Clearly, the composition of my watercolor painting is inspired by his admirable art, shares a similar spirit of intimacy, and maintains a loving respect for the model. Here is my approach, my homage to it, which illuminates the new vision I use for the story.

I strive to maintain a sculptural feel for Bathsheba, but take the freedom to play with a splash of colors, so as to draw contrasts between cool and warm hues. I create a variety of textures, using a loose, spontaneous brushstroke. This I achieve by applying puddles of pigments over Yupo paper, which (unlike traditional watercolor paper) is non-absorbent. I let these puddles drip in some places, and in other places, I lift and shape them into careful designs, using various tools.

The font selected for the title depicts a regal, dynamically slanted, and rather grandiose handwriting style, just the way I imagine David’s penmanship in his private diary.

By contrast to the title, the font selected for the name of the trilogy—The David Chronicles—is a more formal one, and it is presented in capitals. This adheres to the font scheme for the cover of the first volume, Rise to Power.

At the top, the letters are bathed in golden light, which fades gradually towards the bottom. Down there, they are soaked in a blood red color, as befits this dramatic affair of love and war.

A Peek at Bathsheba is one volume out of a trilogy. Therefore I am designing the spines of all three covers to have a matching feel in terms of the image and font scheme. So when you place them on your bookshelf, one spine next to the other, all three volumes will visually belong together. Together they will grace the look of your library. 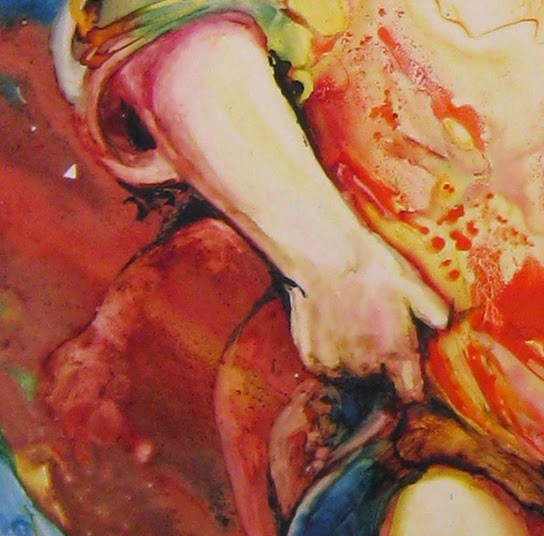 Detail from the cover of A Peek at Bathsheba 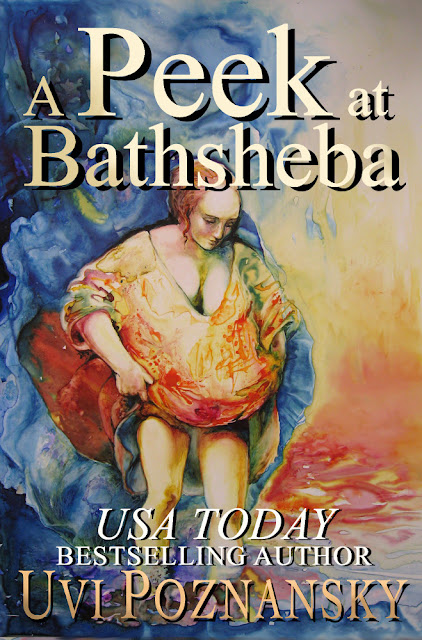 "I am so enamored with the sensual style and delicious delivery
that this review is a purely emotional response as I have just put it down.
I feel like a devotee."
Posted by Uvi Poznansky at 10:19 AM 3 comments:

I marvel in her plan. It is so clever! So deceitful!

At that second it dawns on me—I understand, in its entirety, my mother’s plan; which nearly brings me to split my sides and roar with laughter—but at a single hint from her, I hold it in. No need for other people to hear us.
Intoxicated, I marvel in her plan; and in my mind I shout: My God, this is so clever! So deceitful! This costume, I think, is so much fun! Designed for the pleasure, so to speak, of a blind man... Ha! What does he know! That damn blessing may yet be mine, after all.
In my excitement I stumble across a thought, which is so outlandish that immediately, it makes me sober up. “What if he suspects something,” I ask, in a whisper. I hate to admit it, but it is not love for my father, nor respect for his age, that drive me to such hesitation. Rather, it is fear: The fear to be found out.
She lowers her eyes, thinking intensely, searching for an answer.
So I press on: “What if he touches me? He will guess, perhaps, that I am not the son I pretend to be; and so, instead of a blessing, I will end up, God forbid, being cursed!”
What can she say, I wonder. True, my mother is close to me. We could always think alike. But for the life of me, I cannot understand her right now. She is the mother of twins, so in my mind, she should love us both, in fairly equal measures. In the years to come I would often wonder: Why would a woman do this, why would she pit one son against another?

Yankle in A Favorite Son

Take a listen to my gifted narrator, David Kudler, reading the opening of this excerpt:


If your browser wouldn't play it, try

This is how Yankle describes the plot, which his mother Becky (Rebecca) conceives to cheat both Esav, her other son, and her husband Isaac who is lying on his deathbed. Her plan is for Yankle to fool his blind father, and wear a costume, pretending to be his twin brother. When she tells Yankle, "On me your sin, my son," it is not love for him that drives her.

This is the moment depicted in my sculpture of Rebecca: her hand gesture is meant to wave away his fears--but at the same time, it is only herself that she hugs. You can see nother view of this piece here. 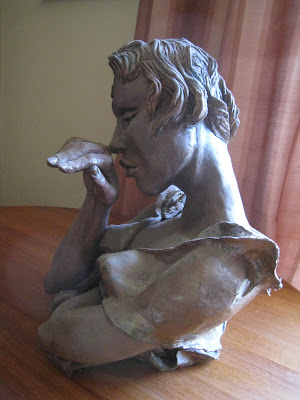 "Her prose is beautiful; she paints intricate, emotionally resonant pictures with words"
Posted by Uvi Poznansky at 10:06 AM 2 comments:

One spine next to the other

My upcoming novel, A Peek at Bathsheba (Volume II of the trilogy The David Chronicles) comes at the heels of Rise to Power (Volume I.) Therefore I am designing the spines of all three covers to have a matching feel in terms of the image and font scheme. So when you place them on your bookshelf, one spine next to the other, all three volumes will visually belong together.

My hope is that together, they will grace the look of your library.

David decides to tell the true story of his early years

I am honored to get this review is from a reader who is not only a truck driver who has seen most of the continental US through her work, and who is a poet as well!  Cindy J. Smith is the author of Voices In My Head and other books. This is what she wrote about Rise to Power:

5.0 out of 5 stars David's story unabridged,
By
Cynthia J. Smith - See all my reviews
Verified Purchase(What's this?)
This review is from: Rise to Power (The David Chronicles Book 1) (Kindle Edition) 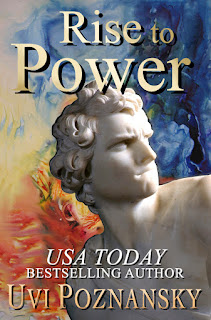 Uvi has written a powerful story of King David from the bible, an "autobiography" of sorts. It starts with David being old and possibly mentally infirm. He decides to tell the true story of his early years.

I love the statement she makes about history being the story the victors want you to believe. It is so true of most historical facts.

Her story relates a version of David that I have always felt to be true. I never could figure out why he is revered as a pious man when his actions belied the description.

This book is well written and I believe the series will be a great accomplishment.
Posted by Uvi Poznansky at 7:46 AM No comments:

The inside story of A Peek at Bathsheba

Against the backdrop of wars, raging within the land and without, David is growing into the mantle of leadership. Between his anointment as a tribal king and his anointment as the king of all of Israel, he uses wisdom, cunning, and his own understanding of the forces of history, aiming for high ideals: stopping the bloodshed, uniting the nation and bringing about healing and peace.

But then, having reached his peak, David falters. He makes a serious error that threatens to undo his political success, and cost him not only the adoration of his people—but also the sense of being sustained by a divine power. That error is most torrid tale of passion ever told: his deliciously forbidden love for Bathsheba, and his attempt to cover up the ensuing scandal by sending her husband—who serves him faithfully in his army—to his death.

This is volume II of the trilogy The David Chronicles, told candidly by the king himself. David uses modern language, indicating that this is no fairytale. Rather, it is a story that happens here and now. Listen to his voice as he undergoes a profound change, realizing the magnitude of his sin, and the curse looming over his entire future.

"I am so enamored with the sensual style and delicious delivery
that this review is a purely emotional response as I have just put it down.
I feel like a devotee."
Posted by Uvi Poznansky at 8:09 PM No comments: