He died by the hand of a woman, the one he loved

“Uriah is dead?”
“He is, my lord.”
He mistakes my silence for grief, and goes on to condole with me. “I’m so sorry to tell you this, knowing how much you loved him,” he says. “Please, please forgive me.”
I give a deep sigh, knowing that my relief can be disguised by it as sorrow.
For a moment I am speechless, and utterly impressed by how cleverly my first in command executed my order. History repeats itself. Joav used it, quite brilliantly, to my advantage. He sent Uriah into a dangerous position, just below the wall of Rabbah, hoping that someone, like that woman in Thebez, would drop a millstone upon him.
And so, my trusty soldier fought his last battle. Perhaps, at the last second—as the arrow was singing in the air, coming closer and closer at him, like a lover eager for a kiss—his eyes started to widen.
Perhaps he knew that his death would not be caused by that arrow, but by the hand of a woman, the one he loved.

The first image, titled 'David sends a letter to Joab' is from the colorful Maciejowski Bible. In this single image, an entire story is told, left to right, much like a cartoon or a story-board: at the left of it, David hands the letter to his soldier, Uriah, so he may deliver it to his commander, Joab. In the center, Joab is leading the attack on the city of Rabbah, planning to place Uriah at a precarious position, just below the city wall, so he may die. And on the right, Uriah is indeed pinned to his death by a defender of the city.

This first image is viewed dispassionately, from an objective point of view, rather than that of David, Uriah, or the besieged defenders. It simply tells the story, without moralizing or taking sides.

The plot to kill Uriah was perhaps based on another historical battle: the Battle of Thebez, a few generations back. During that battle, which is depicted in the second image, Abimelek led an attack on a besieged city. He fought most of the way towards the tower, then drew too close to its wall. And then, a woman on a high point of it dropped a millstone upon his head. The blow cracked his skull—but unfortunately, didn’t kill him. He called his young armor-bearer, and asked him to draw his sword and run it through him, so no one would know, no one would laugh at him, as his demise had happened not by crossing swords with a mighty soldier, but by the soft hand of a woman.

Interestingly, this second image is depicted from the point of view of the besieged, focusing on the heroism of the woman rather than the 'shameful' death of her victim. 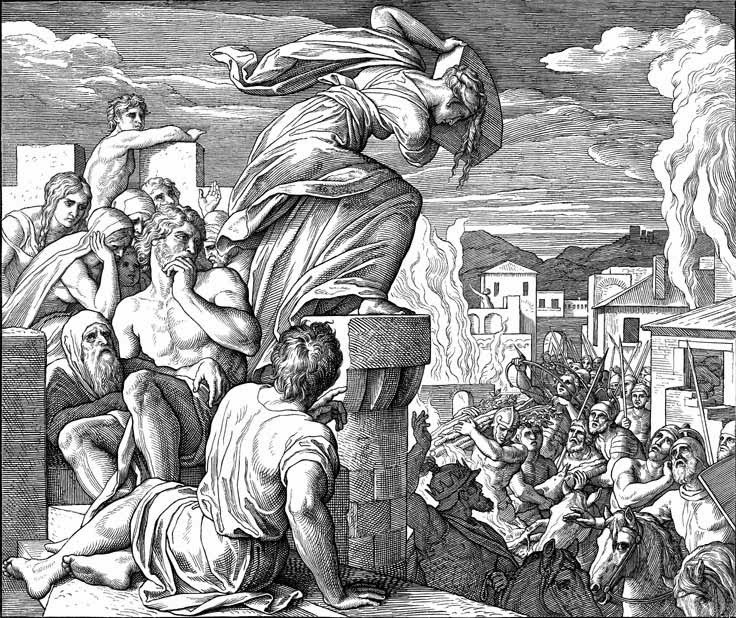 ★ Love historical fiction? Treat yourself to a gift ★

"She writes with exquisite prose and elegant style,
yet delivers piercing truth and insights into the human psyche on the way.
A wonderful read."
Posted by Uvi Poznansky at 9:25 AM