I'm in such a lowdown groove


“Not sure you can drive it?” said Uncle Shmeel. “Just try, what’s the worse that can happen?”
An answer wasn’t expected, so I did not waste time looking for one. Instead I asked, “Are you sure?”
“Sure I’m sure!”
“Can you afford it?”
“No,” he said, “but how could I say no to such a fine vehicle? I got it as a birthday gift. Pearl is grateful, so grateful to me for letting her cling to the hope that she can change me, despite all evidence to the contrary. She knows how to treat someone like me, someone who appreciates the more elegant things in life.”
“You,” I said, “are a lucky man.”
To which he shrugged. “She’s a patient woman.”
Out of his pocket came the car keys, jingling.
“Here,” he said. “You’re going to have great fun driving her. She’s such a beauty!”
“You mean, Pearl?”
“No! The car.”
“That,” I said, “was my second guess.”
“She’s sitting there idly,” he said, pointing farther ahead, across the intersection. “There in the driveway, see? And she’s doing nothing but trying to tempt me morning, noon, and night to take her out for a spin, which is the first thing I’ll do as soon as I get my driving license.”
“What’s stopping you?”
“I keep failing the damn test.”
We turned the corner and there she was, looking quite substantial in her wide, matronly body, radiating heat in the mid-morning sun. She was graced by the ample roundness of the front and rear fenders, which were shaped as puffed-out cheeks. The grille was a three-part affair with a tall center that nosed its way down in-between twin nostrils, low down on the fenders. I imagined that she knew I was coming for her.
As I turned the key in the ignition I saw Uncle Shmeel in the rear view mirror, taking the clarinet out of its case and putting it to his lips. Then, growing smaller and smaller as I drove away to Natasha, he could still be heard across the distance, blowing a tune for me. One note after another rose trembling in the air, awakening a mood, a joy turned into something inexplicable, into sadness, over which I murmured, “I don't need a song to prove that I'm in such a lowdown groove.”

Lenny in The Music of Us
[narrated by Don Warrick]

Head over heels in love with Natasha, Lenny is on his way to a first date with her. But besides this romance, he is also enamored with the car... Which you can tell, because to him she seems like a voluptuous woman in heat!

It is such a pleasure to listen to Don Warrick, the narrator of the audiobook edition, singing the songs of the era. His singing infuses the novel with musical magic and sweeps you all the back to the first years of WWII, such as in this passage, the reference to the hit song A Lowdown Groove.

"Masterfully written, this is one of those reads that will stick with you by evoking emotion and causing an introspective contemplation"
- Dennis Waller, Top 500 Reviewer 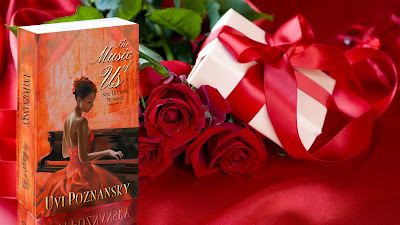