Do No Harm: Death Hub by @DassoEdwin

She reached down and put her fingers over the man’s carotid then gazed up at Tyler and shook her head. “Nothing. Dead as a doornail. From the temp of his skin I’d say he has been for a while.”
They both jumped as they heard a commotion coming from the rear of the small home.
“What the hell?” Tyler said. “That sounds like a bunch of damn chickens back there.”
“And it sounds like they’re inside the house,” Sherry grumbled, shaking her head. They slinked toward a shadowy hallway leading to the rear of the home, Sherry throwing her arms up in front of her face when a chicken flapped past her, squawking wildly. “Jesus! Really? Chickens in the house?”
“Yeah,” Tyler muttered. “I sure hope the neighbor was wrong about seeing a kid here. This place is a friggin’ pig sty!”
“You got that right.” Sherry held a hand over her nose, pinching her nostrils closed. “Smells worse than it did outside.”
They stopped at a closed door and exchanged quick stares then Tyler flung the door open. Several chickens ran around the room in a flurry, feathers flittering in the air amidst a cloud of dust. A couple of the birds burst past the two cops as they stood at the door, their mouths hanging open as they stared into the room.
Sherry spit dust and crud from her mouth then rushed in and knelt on the floor next to the large cage.
“Jesus Christ! You gotta be kiddin’ me!”
The boy inside it, who appeared to be about eight-years-old, bounced around inside the cage like a pinball, clucking and flapping his arms like wings as he fired quick glances over his shoulders at the two cops. Sherry took her phone from a pocket and hurriedly snapped a couple of pictures then undid the latch on the cage door. She inched a hand out toward the boy.
“We won’t hurt you, little buddy…we’re here to help,” she whispered, wiping tears from her eyes with her other hand.
The boy pressed himself against the far side of the cage, clucking frantically.
Sherry turned to her partner. “You better go get that CPS lady.” She turned back to the child in the cage. “I’ll stay here with him.”
“I’m on it,” Tyler said, bolting toward the door.
“And call an ambulance!” Sherry called after him.

The child calmed slightly after a minute, eventually squatting down on his haunches in a large nest of straw as he stared at Sherry, his head twitching like any chicken would when they regarded something.


She scowled toward where the dead man sat in the other room. “You piece of shit!” Sherry growled. “The world’s a better place with you dead.” She crawled further into the cage and rested a hand gently on the kid’s knee. 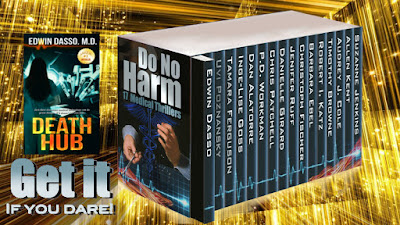 New release! Get it now:
Do No Harm

Posted by Uvi Poznansky at 7:40 AM