As to the bedroom scene with Bathsheba... Lord, forgive me the sins of my youth!

I invite you to read this fascinating article, written by Justin Harmer, the gifted narrator of my novel A Peek at Bathsheba. Like my legendary character David, Justin is a prolific poet and musician (playing the harp, among other instruments.) If, like me, you are curious about the process of blowing life into story, by delving into your soul, deep inside, to find the truth at the heart of the characters, then check this out:

As to the bedroom scene with Bathsheba... Lord, forgive me the sins of my youth!

Uvi asked me to talk about some of the aspects of recording her wonderful book. Its been a huge amount of fun and a dream to read - by turns funny, lustful, angry, repentant, divine and human. Alternating between the characters was relatively easy - thanks to her writing and characterization. In my head I found a friend - or enemy - who I could connect up to the character concerned, and took an aspect of them to inform their accent. For Joav, the highly aggressive military leader, I modelled his sharp, penetrating way of speaking on a combination of a worryingly over-intelligent friend and his close relative who was in the British special forces. Once I could hear the voices - and find a way of getting it across - it was quite easy to character switch.

For Nathan, Uvi gave a great character tip that he should have a sheepish element to his voice. The exasperated voice of a housemaster from my schooldays emerged to me as I read this role - much imitated by us pupils 30 years ago behind closed, teenagers bedroom doors. The character was different admittedly but the sheepish drone idea gave me a way in.

For David's 8 wives, again Uvi's tips were invaluable, and their characters seemed to echo the physical clues. Abigail: warm and sweet as a raisin cake and cloying as honey with her 'My Lords': I could just see her trading herself up in David's direction, with a sticky bun in the other hand. Michal was harder to find - I imagined her as quite upper-class and English, somewhat brittle, and cold, cold, cold - despite her former love for David. Her despising him for dancing before the Lord "in a linen Ephod" is so chilling - the penalty is so appropriate: she sounds so mean-spirited and practical. Uvi bringing out her snobbery was the key.

David was the character that I felt much the closest to in terms of disposition - the voice I use for him is my own, and it made reading the part very accessible and personal. I tried to access as much of my own experience when describing his as I could: when he was sobbing, I thought of my own two lost children. As he repented, I found that part of me that sees my sin and shudders. In his joy, I thought on my own. As to the bedroom scene with Bathsheba... Lord, forgive me the sins of my youth!

The technical side of producing an audiobook is quite challenging - this was my second go at it, with a third lined up for publication in January. My first book, Julian Chitta's history, Emperor Constantine: Peace Be With You, another life of a historical character, didn't fully prepare me for the task of reading A Peek at Bathsheba. Uvi's book was 10000 words shorter but the recording is double the length: it's all those meaningful silences! My studio is inside the middle cupboard of my music room on the second floor - thank goodness for the noise removal function on the sound recording programme I used: we're underneath the London Heathrow flightpath... working early in the morning minimised the aircraft disruption. Not very 10th century BC!

Singing the music and playing the piano for the credits, although only a small part of the overall end 7 hours, presented a great challenge and made a pleasant change from the grinding process of editing sound files - finally I could move my microphone out of the cupboard! The harpsichord playing was a good way to get to know the little tenor aria from Handel's oratorio, Saul.

The words from the aria begin 'SIn not, O King' - at one level, if only David had remembered the warning given to his Father-in-Law; but then again, as Joseph says in Genesis about his mis-treatment at the hands of his jealous 11 brothers: 'You meant it for evil, but God used it for good.' As far as the story of David's lustful peek and adultery with Bathsheba goes, and the murder that follows, Uvi has too!

Here is a little background about Justin:

Justin Harmer first trod the boards as a tap dancer a long time ago in a galaxy far, far away... His very short-lived dance career was briefly revisited at Sadlers Wells in the late 80's with the National Youth Music Theatre. From this dizzy, square-dancing height he went on to be the lead (and a deluded, chicken chasing Knight Errant) in one of their 3 production's at the Edinburgh International Festival, alongside Jude Law who was the lead that year in their production of Joseph's Technicolour Dreamcoat... A long time ago in a galaxy of stars, far, far away...

He was the first white artist to appear at the MOBO awards (no it wasn't Jamie Cullum: it was me!) as keyboard player for the band Streetwise. A brief 8 year spell at University saw him play a jester in full jesting gear, a comedy king, the season Winter, the concept of Sleep, a diabolists sidekick and an onanist disturbing policeman (as well as weddings and funerals). There was the odd sighting of an Old Testament prophet or two and various Christs and Pontius Pilates.

Otherwise he has appeared as Death in a codpiece and an elderly owl in Marbella. He has performed his own composition at the Wigmore Hall, and also played one of the three kings in Westminster Abbey (Melchior), sung at Barbican Hall, St John's Smith Square, Queen Elizabeth Hall, Albert Hall (Canteen and Elgar Room), Snape Maltings Aldeburgh, Edinburgh Fringe (as a gangster), York Minster, Chelsea Festival (as another Old Testament character) and sightread his way round more choirs than is advisable.

As an ivory tickler he worked for the Royal Ballet School for 10 years and the Royal Academy of Dancing for 2. He fairly recently performed Beethoven's Emperor Concerto (which was almost fun for the other pianist!) He has sung as soloist in a blitzkrieg of European countries as well as playing various other biblical characters in Jerusalem.
He has played on screen a very convincing mad Organist and several vicars... Oh and a Bond villain in a towel (it wasn't yellow though.) He made his professional debut as a ship's cook.

Justin has sung alongside Alfie Boe and James Rutherford, Sarah Fox, Leigh Melrose, and perfomed for Liz and Phil and various cousins of theirs, John (Major), Maggie and Denis, Edward (Windsor), Andrew (L-W), various Archbishops (including the rainbow one), Uncle Tom Cobbley and various papered and hallowed halls.

His optimism that he would eventually be recording with Basstone music an album of his compositions has paid off: the court case didn't go belly up in the end...

He is a published and performing poet. Between him and his wife Charlotte they have 17 godchildren. A miracle in which his knee was involved was reported on the back page of the Catholic Herald, but that was on the top deck of a bus in Peckham which is, as they say, a galaxy far, far away...

The music for the opening and closing credits, played by Justin Harmer himself, is from Handel's Saul - it's a tenor aria: 'Sin not O King.'


If your browser wouldn't play it, try this 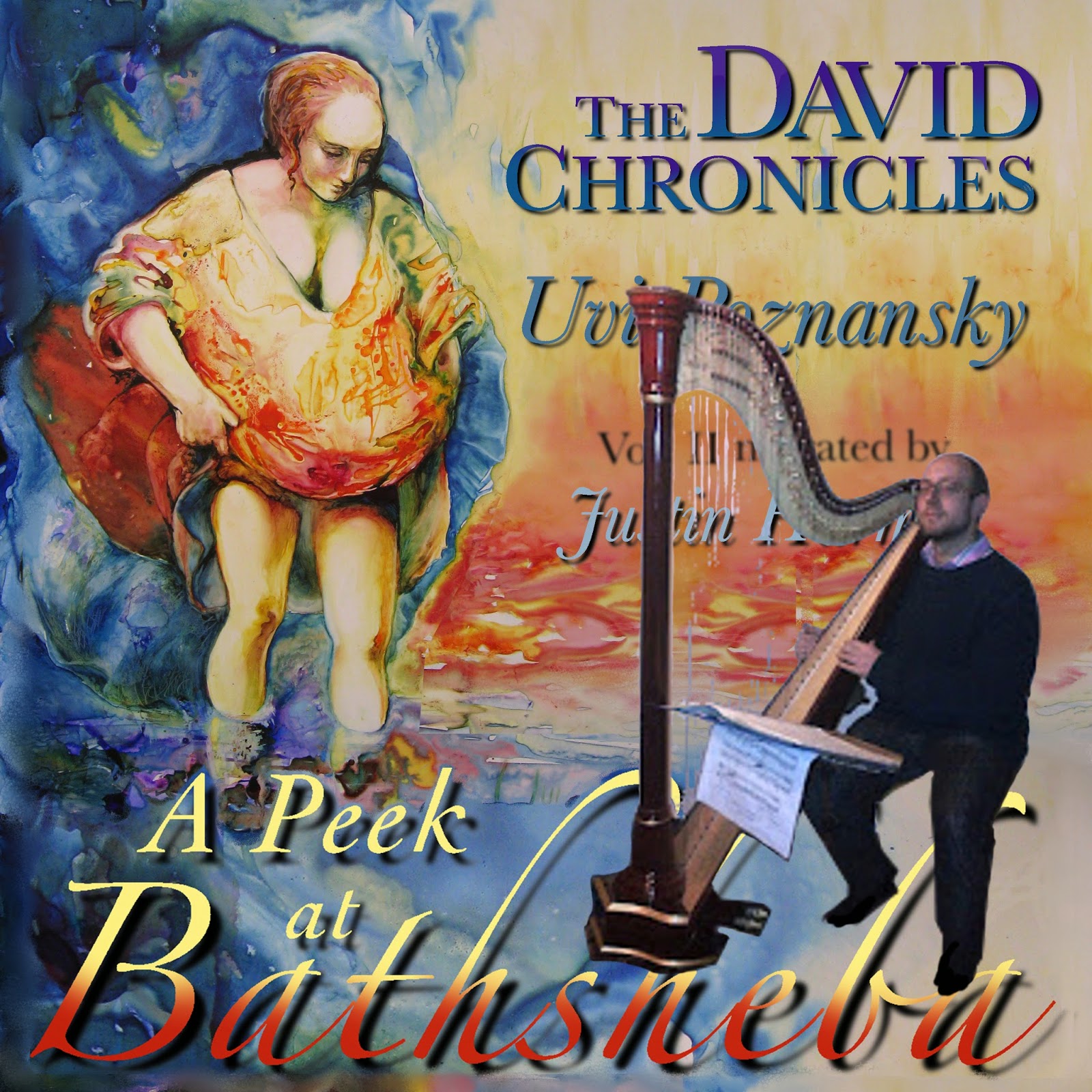 Posted by Uvi Poznansky at 3:14 PM