Didn’t you tell her there’s a war going on?

“Didn’t you tell her there’s a war going on?”
“I said it only a million times! I told her over and over: it’s a long journey across the Atlantic, and ships are being sunk every day. But what good did it do me? She won’t listen!”
“I can’t believe it,” I said, exasperated.
“Neither can I,” said Mrs. Horowitz. “Trust me, I didn’t give her my blessing, not even my permission to do this, but some organization—I think it’s called USO—did.”
“What’s that?”
“From what I hear, their mission is to provide morale-lifting services to U.S. soldiers wherever they serve, ‘Until Every One Comes Home.’ Somehow they decided to do it at my expense, I mean at the expense of putting my daughter in harm’s way, just so she can play music to entertain the troops. Oy, Lenny,” she said, her voice trembling in-between sobs, “I’m so afraid, so terrified that something bad will happen to Natashinka, that I can’t think straight.”
Meanwhile pips started to sound and I knew that a few seconds later, the line would go dead unless more money was fed in. I checked my pocket, fumbling to find more coins, but no luck: it was empty.
“Which ship?” I asked, at full tilt, knowing that the call might end at any second now. “Which port, when—”
“Well,” said Mrs. Horowitz, and in the background, those bedsprings under her came alive again, giving another moan. She must have stretched in bed, perhaps to get a handkerchief. I imagined her arms, with wings of flesh hanging flabbily down, flapping all about. To the sound of her blowing her nose into it, I wondered: did she even pay attention to what I asked? Was I going to get an answer?
“Well,” she said at last, “Natasha is supposed to board ship in a few hours, and she told me it’s about to set sail at noon, just as soon as they finish loading some cargo and stuff, so I’m going to go there to pull her off, whether she likes it or not, so as not to allow her to get too comfortable in that pitifully small cabin, because by hook or by crook such is my duty, and when it’s all over I know what to expect, because a mother’s work a thankless job.”

Lenny in Dancing with Air 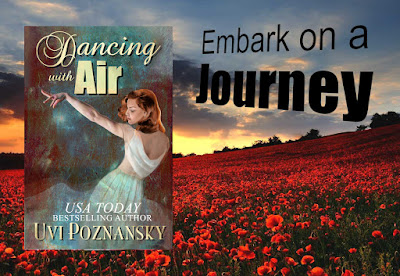 ★ Love romantic suspense? Treat yourself to a thrill ★
The complete series:
Still Life with Memories

"The writing of this intense story of love and heartbreak is what makes it a classic. You'll go through the wringer with this one, but you'll never forget it."

"Dancing with Air by Uvi Poznansky is a lyrical tour se force set in World War II in England. Poetic, evocative, and at times langorously delicious, the new audiobook version adds even more to the sense of "being there" along side the delightful characters who, by the way, span a series of novels over the course of their lifetimes."
- Aaron Paul Lazar, Author
Posted by Uvi Poznansky at 7:10 PM