It’s going to be our secret

From this distance I can barely see her. Wrapped in a long robe, which is made of some shimmering fabric, the only flesh visible to me is her little foot.
From afar I must look too small to her. Perhaps all she can see is a flash, a sudden spark from the corner of my roof as a ray of sun catches my crown. Perhaps she spots a dark shadow slanting into a window in a distant tower, one among many windows, many towers, and to her it seems still, which is why she ignores me, and goes about the business of smelling one piece of soap after another, and rubbing them on her skin.
I glance sideways at Benaiah.
“Tell me,” I demand, as if I have spotted her now for the first time, “who is that woman?”
He squints, the better to see her, and says, “Oh yes! She is Bathsheba, the daughter of Eliam and the wife of Uriah the Hittite.”
“Go knock at her door,” I tell him, “and give her this note.”

He comes back awhile later.
“Done,” he reports. “She read it.”
“And?”
“Nothing.”
“Nothing?”
“Was she supposed to say something?”
“Why wouldn’t she?”
He shrugs.
I groan.
“Shall I run back?” he asks.
Benaiah earned his fame as a war hero, and he killed a lion in a snowy pit, but as a go between in a simple exchange between the sexes he is utterly useless.
“Bring her to me,” I command. “But be sure not to be followed.”
At that, his mouth drops open. On second thought, he gasps.
“If I’m not to be followed,” he says, “how can I bring her?”
“Be sure she’s the only one following you.” I roll my eyes at having to spell things out. “This is between me and you.”
“Oh,” he says. “And Bathsheba too, right?”
“Yes.” I lower my voice. “It’s going to be our secret. No one but us is to know about this, especially not Nathan.”
Having sent my spiritual advisor on his errand and Benaiah on his mission I run down to the King’s Gardens and back up again, bringing with me a huge bouquet of freshly picked Jasmine flowers, which fills my chamber with a sweet fragrance. It is then that time takes a strange, unexpected turn. It slows down.
I have no idea how much of it I have wasted since the beginning of my wait. All I know is that it feels without an end.
And despite knowing that I have arrived, that I am at the prime of my life, I feel, once again, like a teenager. She loves me, she loves me not. With a flick of my wrist, white petals start scattering across the marble floor.
I go out to the roof and pace to and fro. Already, there is chill in the air. The rays of the setting sun give a last flicker before darkness, before a sensation of fear sets in. Then they withdraw, hesitating to touch the tabernacle of God down there, below me.
Coming back in I set the twin sconces, left and right of the chamber door, aflame. Which is when, to the quickening of my pulse, I see it opening.
There she is, lifting her little foot and setting it across the threshold.

David in A Peek at Bathsheba 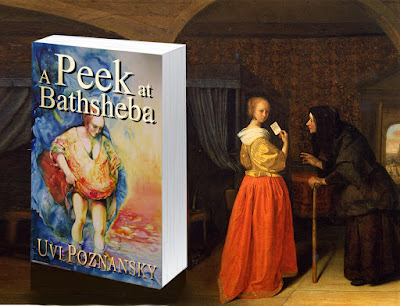 Posted by Uvi Poznansky at 6:57 AM