Start the summer with a bang: Still Life with Memories

Why not start the summer with a bang? Here are excerpts, specifically chosen for their impact, from each one of the novels in my series, Still Life with Memories: 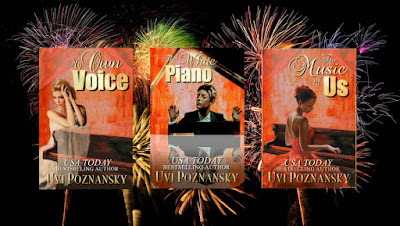 So instead I raise my head and with wild, vicious force, I bang my forehead, then bang it again against the keyboard. I’m free now, so free to attack it. The beast wakes up, and from its belly springs a sharp, fierce cry, which makes the air tremble in bursts, short bursts coming at me, doubled by echoes from every wall, every corner.
Meanwhile, in the background, I can hear them blinds, like, smacking each other, and giving way, suddenly, to a gust of wind. And there, in the opening of the glass door, which leads to the balcony, I spot his outline, standing behind the tape recorder.
The moonlight shines briefly on his shoulders as Lenny crosses the threshold. With a slight limp he makes his way in, and leans over my shoulders. And I can feel his strong arms wrapping around mine, arresting me, blocking my attempt to bang, bang, bang the keys. He turns me around—but me, I try to refuse him, and I fight like a savage, like a cat, and something surges in me, so in my fury I push him, I shove him away real hard, till he falls to his knees before me.

Anita in My Own Voice

So then, bang! I pound the keys, this time fortissimo—with full strength!—as if to cry, Stop! No more darkness, no more gloom! There’s a thud, there’s a boom! Hear this, right here? Hear my voice? Tell me, Yes—you have no choice!
And before this phrase fades out Anita straightens her back, and places her hand on the keys. Then, to my astonishment, she plays the next phrase of music, this time with raw, intense force, which I never knew existed in her, bringing it to the verge of destruction, making it explode all around me. And I, in turn, explode with the following one, because how can I let her outdo me? I am, after all, The Entertainer...
Here I come! Here I drum! No more woes. Let me close! Let me in, hold me tight! Don’t resist me, do not fight—

Ben in The White Piano

The M1 Granad, with which our company was practicing shooting skills, is a semi-automatic, shoulder-fired rifle loaded by inserting a metal clip that contains eight rounds into the receiver. Once the eighth round has been shot, the empty clip automatically ejects with a notable noise, a ping that would cost the lives of many soldiers, as it would provide the enemy with a clue as to their whereabouts, especially in close-combat fighting.
That morning in training camp it was not the sound of loading, nor was it that distinct ping that alerted me to danger, but the whisper of blades of grass tearing asunder, falling with a whoosh left and right as the bullet came flying straight at me. Like a thunderbolt, it hit my shoulder. There is nothing friendly about so-called friendly fire. Searing pain started spreading to my arm, my entire quivering body. I staggered into a spin and fell onto the soft soil of the earth.
My mind drifted in and out of consciousness. At some point I felt a stretcher bouncing under me, and realized I was being carried somewhere, perhaps to the army hospital. I heard someone ask, “Is he still breathing?”
Wincing in pain I tried to answer, but my tongue would not move.
I recall hands, many hands touching me, grasping my arms and legs, lifting my body onto some hard surface. Then they started to apply direct pressure and elevate my limbs, perhaps to control the bleeding.
I passed out. I came to.
With the bullet isolated from the flesh and pulled out, splints and dressings were applied to immobilize the injured area, which was then wrapped with a dressing. I glanced at my left side. It was beginning to look like a mound of white gauze.
I got a glimpse of the sterile table next to me. It was littered with empty syringes, clamps, and a heap of cotton swabs, most of which were drenched in blood. And there, in their shadow, lay surgical Mosquito forceps. Normally they would be used for halting flow in small blood vessels, but right now they were holding something between their delicate, serrated tips. A bullet.
I passed out. I came to.

On the way back to London I could barely keep my eyes open, except for the very beginning of the journey. The meadow looked gray, with dead horses, cattle and mattresses strewn all about, covered in falling debris. Of the nearby farm, not a single structure remained in place, and not a brick could be found anywhere near it that resembled building material. And there, rising to the sky, swaying in the wind, hung a mushroom cloud.
The earth quaked. Casting a look over my shoulder I saw a ripple going through it. Then a big depression was being formed out there, with cracks yawning wide. Before long it became a cavernous crater, maybe a hundred feet deep, threatening to swallow us alive. Its mouth spit up dirt and rocks, only to devour them with an incredible crackling sound as they came tumbling down. There was something eerie about this landscape. It was ravenous. Riding at utmost speed, we kept just out of its lip.

Lenny in Dancing with Air

Then she whispered, “You look happy, my love.”
And I said, “Natashinka, will you marry me?”
“I will,” she said, “even though I know what Mama will have to tell me about that. You can guess it too: ‘Over my dead body.’”
“Which is a funny thing for her to say, because that’s just the kind of wedding I was expecting, until not so long ago. Over my dead body.”
“That,” she said, “would make for a short marriage.”
“And,” said I, “an unhappy one.”
“Ma knows nothing about what we’re going through, about you heading for an execution at the hands of the SS soldiers, and me pretending to be pregnant, to save you, somehow, from it.”
“Haven’t you told her about your proposition of marriage before death?”
“No, Lenny. Telephone lines have been cut off. I have yet to find a way to contact her. For now, all Mama knows is that one way or another, she must stop you from marrying me.”
“Let’s mail her an invitation to the wedding.”
“Really?”
“Really! I think she’ll be thrilled by it.”
“Oh Lenny, you know she won’t.”
“Seeing the look on her face as we exchange vows would be half the fun.”
Natasha laughed, only to turn serious once again. “I want it to happen in Paris.”
“Then, let’s get there in a big hurry,” I said. “But first, my love, don’t we have to go back?”
“Back where?”
“Up to the clearing in the woods, to let the partisans and their leader know that you’ve kept your promise.”
“The boy will do that for me. He’ll tell them to expect an air drop.”
I relaxed into thinking that for the first time in a long time, there was nothing for me to worry about. The future seemed bright. We were together. We had no plans, and it was just fine that way.
“You look sleepy,” she said. “Come here.”
She wrapped her arms around me. I closed my eyes, and on the verge of dozing off, imagined the boy arriving at the camp, up there in the hills. I could just see the partisans, coming out of their tents late in a moonless night.
They would tremble slightly in the cold night breeze, wrap themselves in their ragged blankets, and turn their eyes to the west, where a whir of engines would signal the coming of British planes. Hanging beneath silk parachutes, crates of armaments would start dropping, ever so dreamily, from the starry heavens.

★ Love Family Saga? Treat yourself to a gift ★
The complete series
Still Life with Memories
Volume I:

Posted by Uvi Poznansky at 9:55 AM