How dare you deny what happened between us?

“This is the man I loved.”
She had just confessed her love to me—in the past tense.
So, what had happened between us was now over and done with! Poof! If not for the bun in the oven, there was no warmth left.
I told myself, stop! Don’t take it so personally, or you’ll go mad. After all, here she was, pretending to be a French maiden who had allowed herself to be seduced. Of course, the whole affair was invented out of thin air. It concocted some other fellow—a good-for-nothing low-life, who was far different from the real me.
Should I play along? Stepping into his shoes, should I go where this contrived tale might take me? Surely I should stop feeling sorry for myself—or truly, for myself as him—for having lost her love.
If this was the effect of her story on me, perhaps The SS officer, too, would be swept into believing her. She was gambling on that and on another thing, too:
Clearly, Rochelle had to keep him interested in her. He would not respond to any plea from her, nor would he take any action on her behalf—unless he expected to get something tangible, something substantial in return. It mattered not to him that she was pregnant. Everyone could see what was burning in his eyes. Lust.
To my dismay I caught him licking his lips as he glanced at the seams of her sheer, nude-color stockings. He must have imagined rubbing his hands along those shapely legs, all the way down the hose to her heels, where squares of the darker reinforced knit peeked just over the shoe heels.
She must have felt his gaze, too. Her forehead glistened under the little veil of her hat. With a little sigh, she dabbed her temple with her handkerchief.
She muttered, “Oh, I am so hot! Can I get something to drink?”
“Schnell,” said the SS officer, “Quick! Give her what she needs.”
In no time, a glass of water was placed in her hand by the French clerk, who was still narrowing his eyes, trying to recall where he had seen her.
Ignoring him, Rochelle studied the reactions of the SS officer. Perhaps to test the extent of her influence over him, she made a bold move. First, leaning against the edge of the table, she crossed one leg over the other, which caught his attention. Then she pointed at me.
“There he is, the man I loved, the man who left me. Has he changed? I wonder. One thing is for sure: he looks as if he might faint,” she said. “Can you give him a drink, too?”
“No,” said the SS officer, this time sternly.
“Why not?”
“I don’t waste my favors on those who have been sentenced to die.”
She took a small sip of water to revive herself, or perhaps to gain time, to think about her next move.
Meanwhile, he turned to me.
“You,” he called. “Stand straight! Now look at this lady. Do you know her?”
“No,” I lied, hoping to untangle her fate from mine. “I never saw her in my life—”
“You devil, you!” she exclaimed. And with a click of her high heels, Rochelle came so close to me that her breath mixed with mine. As if by a spark, heat rose between us. In a blink, I thought, she might kiss me.
Instead, she raised her hand and slapped my cheek, slapped it hard.
“How dare you,” she cried. “How dare you deny what happened between us?”
This scene happens in a Nazi stronghold in France, in the days following the Normandy invasion. Having been caught by SS soldiers and thrown into a cell, Lenny is now awaiting his fate in a selection process, when the unexpected happens. 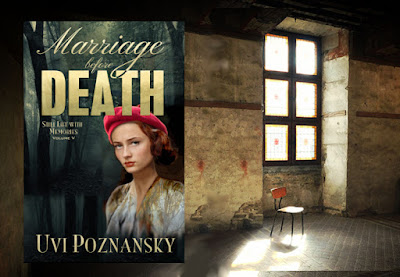 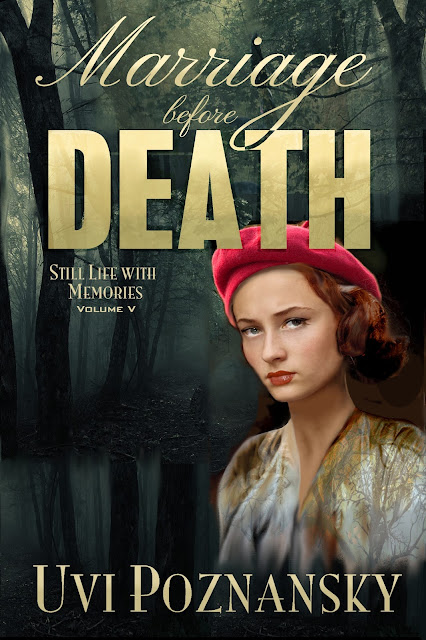 "Uvi Poznansky, a master story-teller, captures the sights, sounds and smells of World War II France, bringing them to life with an imaginative plot, excellent writing, a mastery of fine detail and the creation of imagery in her scenes. She draws you into the story as though you were there, experiencing what Lenny and Natasha experience."
- Bill Cronin, Author
Posted by Uvi Poznansky at 1:51 PM