There she is, my queen of the night

What draws me to the story of David?

It is not religious reverence that draws me to the story. Rather, it is the drama of his life, which my trilogy, The David Chronicles, explores from youth to old age. I find it amazing to be in his skin over a lifetime of loves and wars, and I hope you will too.

His struggle is one that we can all feel inside us. Can he find an inner balance between conflicting drives: his ambition for the crown, his determination to survive the conflict with Saul, and his longing for purity, for a touch of the divine, as expressed so lyrically in his psalms and music?.

David is famous for bringing his kingdom from the brink of annihilation to a prosperous age, a renaissance. With all his gifts, he is indeed a renaissance man. This is his story as you have never heard it before: from the king himself, telling the unofficial version, the one he never allowed his court scribes to recount. In his mind, history is written to praise the victorious—but at the last stretch of his illustrious life, he feels an irresistible urge to tell the truth. In the first volume of the series, David gives you a fascinating account of his early years, culminating with a tribal coronation. Rooted in ancient lore, his is a surprisingly modern memoir.

What's different about my writing style?

I would describe my writing style as layered, much like Lasagna, with each layer having a different flavor and a different texture that complements the entire dish. How do I achieve this? The process, for me, is very similar to the way I sculpt: I shape the clay, then go around the unfinished piece and view it from an unexpected direction, in various lights, sometimes in the morning, sometimes at night, so as to achieve an effect that works well for me. Similarly when I write, I shape my text several times, each time refining it with a different idea, different principle in mind. For example, one such idea would be this: the end of a paragraph leaves gap of silence before the next paragraph begins, so end it on the strongest word so it continues to linger, continues to resonate with you.

What's unique about my writing process?

As an artist, I find great inspiration in art throughout the ages, describing each moment in the life of my character, and exhibiting different attitudes towards him. Often I create a scene that is a vivid expression of a particular piece of art.

During the history of art, most artists portrayed Bathsheba as a fleshy, mature woman. They often placed her in a lush outdoor scenery, such as a royal garden, with flowing water or with a fountain. Spotting a forbidden woman in a setting reminiscent of the Garden of Eden is a tempting fantasy, and quite a departure from the biblical account, that states she was bathing on her roof. Artists go after their own heart—and so, indeed, do writers—to suggest the emotional essence of the story.

Rembrandt places his figure not in a garden, but in a cave with a pool of water, which is at once an outdoor and indoor scene (and in Bathsheba at Her Bath he presented her in an indoor scene, in her bedroom.) He worked mostly with a grays, browns, and blacks, setting objects back by plunging them into this dark tone, and bringing them forward by shining a bright light directly upon them, creating stark contrasts. The resulting image is sculptural in nature, and strikingly dramatic.

Clearly, the composition of my watercolor painting is inspired by his admirable art, shares a similar spirit of intimacy, and maintains a loving respect for the model. Here is my approach, my homage to it, which illuminates the new vision I use for the story.

I strive to maintain a sculptural feel for Bathsheba, but take the freedom to play with a splash of colors, so as to draw contrasts between cool and warm hues. I create a variety of textures, using a loose, spontaneous brushstroke. This I achieve by applying puddles of pigments over Yupo paper, which (unlike traditional watercolor paper) is non-absorbent. I let these puddles drip in some places, and in other places, I lift and shape them into careful designs, using various tools.

And here is an excerpt describing the cave scene in A Peek of Bathsheba:

Watching the cracks in the rock I listen how water gurgles underneath them, how it comes, siphoned out with a big, sudden splatter—only to be swallowed back once again.
Such is the ebb and flow of life.
Climbing up I imagined the view I would have up there, at the top of the world. And now, having achieved victory, I am beginning to come down, seeking reflection.
From outside the cave comes the hoot of an owl. Outlined against a dreamy moonlight, it strikes an upright stance, and turns its large, broad head to face me. Its gaze meets mine. At the moment I feel a strange affinity to this bird of prey. Like me, it must cherish its solitude.
And as it spreads its feathers I think I see out there, behind the flutter, a curvaceous outline of a nude. I ache to touch her flesh. It is glowing with warm, reddish hues of terra-cotta. Her breasts are tipped with gold.
As if springing to life out of some Babylonian plaque, there she stands, surrounded by owls.
There she is, my Queen of the Night.
“Bathsheba,” I whisper. My voice gets lost in the vacuous space.
A moment later, the owl takes off. It rises away in its silent flight, and the illusive light of the moon starts dimming out. 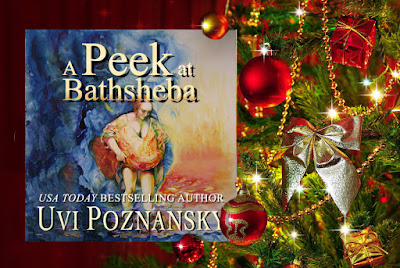 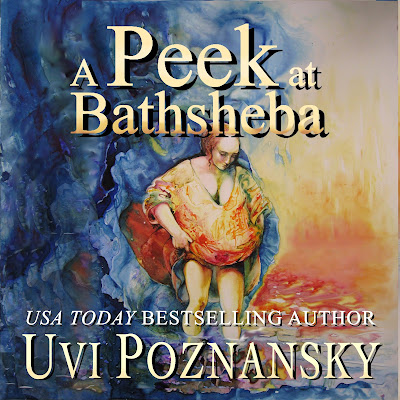 "Written with the artistic grace that is her signature style. She writes with a calm, steady hand that plucks the strings of her tale with lyrical precision that leaves the reader deeply entrenched in her words long after the last page."
-Dii, Top 500 reviewer
Posted by Uvi Poznansky at 3:40 PM