Here is a first glimpse into what I've been up to lately: heading a new multi-author series where each author contributes a thriller, and—get this!—weaves in scenes with guest characters penned by the other authors in the team.
The principal characters in the series are all high-tech crime fighters, even if they are amateur sleuths. They are connected to several plots in this series, lending their state-of-the-art skills to solve several of the mysteries.
The authors are a team, and so are their characters!
With this in mind, I wrote several brand new dialogs for my thriller, Virtually Lace. This book will be taken out of the Ash Suspense Thrillers series and become volume 1 of the new series, High Tech Crime Fighters. I will also redesign the cover and create covers for all the new volumes in the multi-author series. The image below gives you a hint of the new design, it is on the drafting board as we speak!
My guest character is Michael Foreman, penned by Robert I. Katz in his upcoming new thriller, Virtually Undead.
Michael Foreman is 6'2" tall and thin, with long ‘surgeon's fingers.’ He's an excellent pianist, particularly classical, though he has a secret passion for boogie-woogie. He never played sports in school and doesn't appear physically formidable, aside from his height, but he has excellent eye/hand coordination and is more athletic than he looks. His parents are archaeologists, and often, when he was a child, dumped him either with his aunt's family or his grandparents as they went off on digs. He is somewhat emotionally repressed.
Here is one of his dialogs with my character Michael Morse(narrated by my wonderful voice artist, Don Warrick):

A sense of loneliness swept through him, perhaps because of the chill. When his cellphone started buzzing, he jumped at the opportunity to talk to someone, anyone, even if it was some wrong number. It wasn’t. It was Dr. Michael Forman, whose call the other day had been left unanswered. Why on earth would this successful man, who had such an illustrious education, be looking for a high school dropout like him?
“Michael Morse?” said the doctor. His voice was raspy. Tired, too, perhaps because of spending long hours at the ER, or because of the mixed blessing of saving some of his patients, losing others.
“Yes, that’s me.”
“I’ve been trying to get in touch with you for some time now. Let me introduce myself—”
“I know who you are,” Michael blurted out.
At the other end, the man gasped. “You do?”
Michael recalled seeing his picture somewhere: a handsome fellow, older than him by five years or so, but already weighed down, perhaps by the gravity of his profession, his face pasty as if he rarely saw the light of day. In his eyes was an unmistakable look, the look of being tired, even bored with life, as if he would rather escape the all-too-bright glare of professional success and do something entirely different. Play the drums, maybe.
“Doctor Forman,” said Michael, “a few months ago I read scores of your abstracts, which I found online. Fascinating research. Of course, I’m unqualified to fully understand it.”
“Oh, I’m flattered,” the man said, in a somewhat uneasy manner. There was a repetitive sound at the other end. Perhaps he was drumming over his cellphone with those long surgeon fingers of his.
The conversation came to a halt, so finally, Michael was moved to explain, “At the time, I wanted my girlfriend to get a second opinion from the best brain surgeon out there, but since then—”
“She’s stopped dating you?”
“She’s recovered.”
In return Dr. Foreman gave a chuckle, or that’s how it sounded to Michael Morse. So, he felt compelled to clarify. “She’s awakened from her coma—but what caused it in the first place remains a constant source of pain. You see, Ash was raped and severely beaten. Even worse: to this day, she doesn’t know the identity of the attacker.”
“Sorry to hear it,” said Dr. Foreman. “Of course, at this point I can’t do much to help—but I know someone who can.”
“Really? Who?”
“My cousin, Rachel Foreman. She’s in Chicago. A few years back, she worked at a series of jobs at non-profit organizations, devoting herself to helping abused women or women otherwise down on their luck. Let me text you her number.”
“Thank you, but I don’t think Ash will want to talk with her.”
“Why not?”
Feeling suddenly choked, Michael uttered a sigh. “Because. Ash seems to think that no one can possibly understand what she’s gone through.”
“Well then.” Dr. Foreman cleared his throat, which seemed to remove his cool, professional tone. This was personal. “Tell her that Rachel, too, suffered an ordeal of a horrific nature.”
“Even so,” said Michael, shaking his head.
“To make a long story short, my cousin was kidnapped on the highway, then fitted with a suicide vest loaded with TNT, part of a blackmail scheme against her family, you see. Moments after the bad guys got what they wanted, the vest exploded.”
“Oh no!”
“So, Rachel was scarred for life, in more ways than one. She’s still healing, which allows her to understand pain like no one else can.”
“You say she’s in Chicago?”
“She is, but nowadays, distance is immaterial. I know she can do wonders for Ash, even over the phone.”
“I’ll give Ash her number,” said Michael Morse. “Who knows, maybe she’ll call.”
He took a breath and hope filled him. Could his sweetheart emerge from that dark, tight place where she seems to have been trapped?

Meanwhile, Dr. Foreman said, “So, I’m glad to hear you don’t need my professional advice anymore. At this point, I need yours.”
Michael was flabbergasted, but managed, somehow, to mutter, “Mine? About what?”
“Virtual Reality,” said Dr. Foreman. “I’ve heard you’re unmatched in designing VR systems. Games, in particular.”
Michael Morse couldn’t help but beam with pride. “I’ve done my own Dungeons & Dragons game, back in high school, and it was good enough to fool the senses, if I say so myself.”
“So I’ve heard! A friend of mine—you may know him, Ralph Guthrie—told me it was the most brilliant, the most immersive version he’d ever played.”
“Oh, Ralph likes to exaggerate,” said Michael, waving a hand as if to dismiss the compliment and at the same time knowing this is a failed attempt at humility. “I admit, there’s nothing I enjoy better than riding upon the scaly backs of dinosaurs, surveying some prehistoric landscape. You should try that yourself, sometime!”
“Can we meet?”
“Where?”
Dr. Foreman sounded surprisingly ready for this question. “I’m attending a neurosurgical conference in San Diego and would appreciate it if you came to hear my talk.”
Michael hesitated, so Doctor Forman pressed on, weaving in his technical jargon with great ease. “It’s about the interpretation of functional MRI in association with electroencephalography to map brain activity. Don’t worry, it’s more straightforward than it sounds. Afterwards, we can discuss Virtual Reality, perhaps over a glass of scotch at the bar.”
In a blink, Michael found himself overcome by curiosity. Still, he had trouble picturing himself mingling with doctors and investors dressed in suits and ties at some elegant conference hall. “I don’t think I’ll fit in with your kind of crowd.”
“Never mind that,” said Dr. Foreman. “I have a lot to discuss with you. I’m trying to develop systems to diagnose brain damage and compensate for it. Funds I can get, but need someone with your skills to make this dream a reality.”
“You mean, virtually.”
“That’s just what I mean. So, will you come, Michael?”
“Let me think it over.” 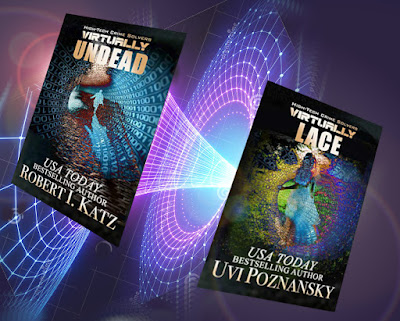