I must get to school, must find the child, must save him. Before it’s too late.

Releasing myself—even with the key in my possession—is easier said than done, because the shackle is holding my elbow up behind me, which forces me to contort my body in a strange acrobatic feat while dangling from the chain, in order to reach the key lock. But somehow, the urgent need to escape the blaze sends a charge of adrenaline through me. I twist around despite the spinal pain, catch the lock, and push the key into it.

And blocked by fire.

Until now, it’s been playful, flaring, leaping into a shower of sparks in the center of the room, where it’s consumed the heap of papers. Nothing remains of them but glittering ash. At this point, the flames blaze into a hungry inferno, chasing me as I leap out from under the closet rod and run around the room along the array of targets, all of which are riddled by bullet holes.

Through the gathering smoke, I hurl myself down the spiral staircase with a speed I never thought was in me. I slip down, swinging around the central industrial pole that holds the treads. It feels hot to the touch, but I ignore my scorched skin and pay little attention to the burnt smell of my hair.

I must act fast, or Timmy will not make it.

At the bottom step, I stumble over Mrs. Gore’s body. She is crumpled in a strange, unnatural position. No breath, no pulse. By the flicker of light, I see my cellphone lying next to her mangled legs. I’m not sure if it still works, after being banged, kicked about and thrown down here by my captor.

I grab it anyway and climb through the hole, out of the broken wall and into my living room. As I roll across the floor, trying to extinguish the fire that has caught my hair, I hear three things: my dog, barking in the backyard. Sirens, coming closer. And my cellphone, buzzing.

“Didn’t you get my distress call?” I ask, choked by the bitter smell of burnt things.

“Distress call?” he repeats, in astonishment. “No, never got it. Why, what happened?”

“What d’you mean? What about him?”

“Paul, he took Timmy,” I stammer, “and he’s heading to Clearwater High School, and he has a gun—”

“You sure?” says Joe. “I’m asking because—this is what I’ve been calling to tell you—we already have the school shooter in custody—”

“Whoever you have in custody is a fake. Listen, listen to me! Paul is about to start another shooting spree if you don’t stop him. He’s just killed my landlady, too—”

“And,” I stress, “Timmy is with him. So you be careful. You must make sure the child is not hurt, in any way—”

Meanwhile, the sirens outside rise to an alarming peak. Through the window, I see the tires of three firetrucks grind to a halt near the curb. Within seconds, my entrance door pops open—but to get out, I’ll have to push my way through the firefighters, who are pouring into the place in helmets fitted with heat resistant eye-shields and goggles, extrication gloves, and boots.

They break open the entire wall, because the hole in it is too small for them. There, under the black puff of smoke, they discover Mrs. Gore’s body. By now, it is already charred. A couple of them load her remains on a stretcher, then carry it out. The rest start climbing up with thick hoses to douse the fire.

I don’t stay to watch it being extinguished, nor do I wait for first aid. I must get to school, must find the child, must save him.

Before it’s too late. 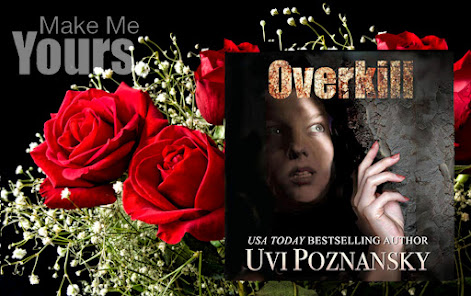 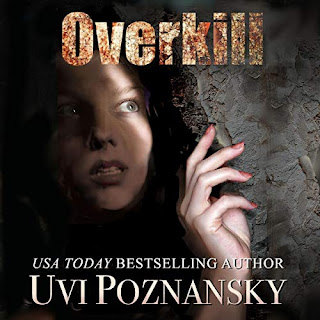 A secret room, a stalker, a missing boy and a schoolyard shooting lead to a nail-biter of a conclusion that will leave you gasping for breath as Poznansky spins a tale of intrigue, tragedy and pure evil that might cause you to reconsider turning the lights out at night. A must for thriller fans.
~Aurora Dawn, Audible reviewer
Posted by Uvi Poznansky at 9:16 AM