Snuggle, But Don’t Let Me Lean

Thrilled to find this in-depth review of my WWII love story, The Music of Us: 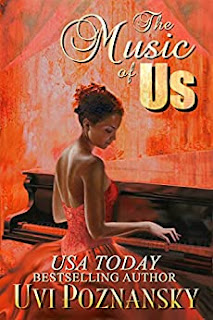 Susan Ricci
5.0 out of 5 stars “Snuggle, But Don’t Let Me Lean…”
Reviewed in the United States on January 31, 2022
Verified Purchase
While reading The Music of Us: A WWII Story, written by Uvi Poznansky, I couldn’t help but wonder if Beethoven’s’ Fifth was the muse that fostered the love between Lenny and his Natasha, the piano player extraordinaire. Will the pianist who learned the beauty of classical music from her deceased father who fears she'll develop Early Onset Alzheimer’s as he did suffer from it, too? Wonder also if the Boogie Woogie Bugle Boy would overshadow her number?Despite that, did she perform her best when a young man steps out of the venue’s line and heads backstage out of avid curiosity?Yes. Hence came God Bless America, but I digress.I adore how Ms. Poznansky constructs such alluring sentences and how so many of them stand out in this incredibly captivating story – Oh! One quote that has stayed with me is, “The memory is a liar.” Shared by the character Natasha as she confides her grief and fears regarding her own future to Lenny, a young man who’s in the military and just happened to be on the stage clowning around as he recovers from a wound, initially hoping to see Betty Grable, and that’s where I stop – you know, to avoid those inevitable spoilers….This story unfolds in two points of view – Lenny’s and Natasha’s, plus also including Lenny’s recounting of dialogue spoken from Natasha, as he viewed it, and the driving force, in my humble opinion, of much of the story.An example: When Lenny is overseas, he’s going through a rough patch – you’ll have to read the story to find out what it is, but - the situation worsens, and he asks to be granted emergency leave to return home. His commanding officers approve it, provided he accepts a mission of a highly respected nature, not to mention emotional import. The emotional portion of the sequences had me in tears because that’s how I respond to exceptional writing. Maybe the scene sparked a personal memory, which reading a story by any outstanding author is wont to do, because of the way the words are presented and give rise to the touching factors when a reader is deeply invested in such a poignant read.Meanwhile, a reunion is in the works while Lenny is home dealing with his sad circumstances - to his amazement, and mine, too. Although this part of the story is fraught with misunderstanding and bumbling errors that could conceivably sabotage the budding romance with his pianist Natasha, true love does run smooth, if only temporarily, and that’s all I will say about that – because the war continues on, and Lenny has to return to it… this is where I zip it. Read the book, you know you want to.There were also sweet lessons to be learned in this story, too, and gentle reminders. Natasha taught me about ‘spirals’, a cool but practical way to arrange flowers in a vase. Lenny, while out on his first date with Natasha, jogged my memory of the pleasures of creamy tomato soup with cheddar toast until, groaning with hunger pangs, I made the food, and continued to read.These two characters were innocent souls beginning love’s journey at a time before I was born – so through the author’s prose, I was able to visualize the streets of New York, the orchestra seats at Carnegie Hall, the town of London after it was bombed, and Scotland where Lenny learned how to become a soldier.As the notes of The Music of Us drew to a close, I realized the journey of Natasha and Lenny had only begun in this tale, and because this sweet, realistic, and engaging tale had already etched a place in my heart, it is only fair I get acquainted with these characters, their son Ben, and perhaps Natasha’s father because I’ve become smitten and need to learn more. There are more stories in this series to be enjoyed.Five golden stars awarded to Ms. Poznansky, for moving me to tears, increasing my respectful admiration of an author I’ve always enjoyed reading, and for allowing me to savor every phrase she used to move this story, ones I privately wished I’d thought of for myself. Bravo!

Posted by Uvi Poznansky at 9:04 PM