I see a woman, an achingly beautiful woman bathing on a close-by roof


One evening I awaken to the sound of birds, chirping. I get up from my bed and walk around on the roof of the palace, where a red-rumped swallow is trying out its skill in a courtship song. It is springtime. The hills around my city roll in and out of green. The trees beacon me from afar, bearing their blossoms.

Through the decorative lattice that marks the edge of my roof I see a woman, an achingly beautiful woman bathing on a close-by roof. She has just wrapped herself with something translucent, so her body is hidden from sight—all but a distant impression of her foot.

The first time I saw Bathsheba, back in Hebron, happened seven years ago. Luckily, at that time I had no historians in my employ, which is why that incident has gone unnoticed, and unrecorded in the scrolls. It remains known to me alone, and to her.

At the time I doubted she had caught sound of my footfalls. I edged closer, advancing stealthily along the shadow, a seemingly endless shadow cast across the flat surface of her roof. Never once did I stop to remind myself that such behavior is unbecoming of a king.

And who could blame me? In her presence I was reduced to a boy.

I brought my crown along, simply to impress her, even though it sat somewhat uncomfortably on my head. It was a bit too large for me, and too loose, too, because it had been fashioned to fit the skull of my predecessor, Saul.

On my way I leapt across a staircase, leading down from the roof. On a railing, there in front of me, was a large Egyptian towel, laying there as if to mark a barrier. I told myself, This isn’t right. I should stop, stop right here and whatever happens I should cover my eyes, avoid taking a peep at her.

Should I turn back?

And immediately I answered by asking, What? Stopping midway is nothing short of a sin. You would never forgive yourself.

To which I replied, stop talking to yourself already! Are you out of your mind?

Alas, now things are much more complex. For one thing, I have more wives, each one of whom keeps an eye on me. For another, Nathan tails me wherever I go. His goat-like beard is like a second shadow behind me.

With him around, there is no way I can pay her a visit. And bringing her to my chamber would be just as impossible.

I send him out on some unnecessary, highly urgent errand, and call in my chief bodyguard, Benaiah, a man whom I have hand picked for this job because of his valiant feats on the battlefield, which require a mind endowed with a special brand of stupidity.

This time I need him not for his courage but for his discreteness.

I point in the direction of her roof, intending to ask him something, but for a spell another vision washes over me, and I recall how alluring she looked back then, at a much closer range.

In the patches between the soapsuds, her skin seemed to glow. The rays of the setting sun were playing all over her creamy flesh, kissing one nipple, then the other. They were touching here, caressing there, sliding around her waist, poking her in her belly button, where she was chubbier than I had expected, and where the shadow sank a tad deeper.

I remember handing her the towel, which forced me to adjust the crown, because it was dancing on my head.

In profile, her lashes hung over her cheek, and the shadow fluttered. Bathsheba brought her hand to her lips and ever so gently, blew off a bubble. It came off the palm of her hand, then swirled around in the evening breeze, becoming more iridescent until its glassy membrane thinned out, and then—pop! Nothing was left but thin air.

Now, despite being an illustrious king, I am nothing to her. Perhaps, thin air is all she remembers of me. Perhaps I alone cling on to that moment, unable to forget it.

From this distance I can barely see her. Wrapped in a long robe, which is made of some shimmering fabric, the only flesh visible to me is her little foot.

From afar I must look too small to her. Perhaps all she can see is a flash, a sudden spark from the corner of my roof as a ray of sun catches my crown. Perhaps she spots a dark shadow slanting into a window in a distant tower, one among many windows, many towers, and to her it seems still, which is why she ignores me, and goes about the business of smelling one piece of soap after another, and rubbing them on her skin.

I glance sideways at Benaiah.

“Tell me,” I demand, as if I have spotted her now for the first time, “who is that woman?”

He squints, the better to see her, and says, “Oh yes! She is Bathsheba, the daughter of Eliam and the wife of Uriah the Hittite.” 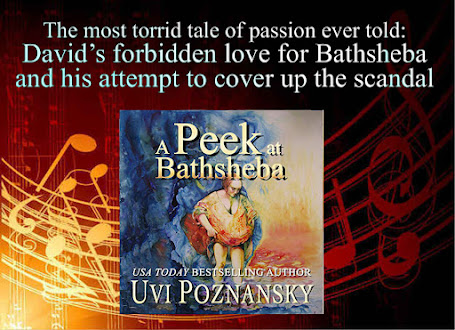 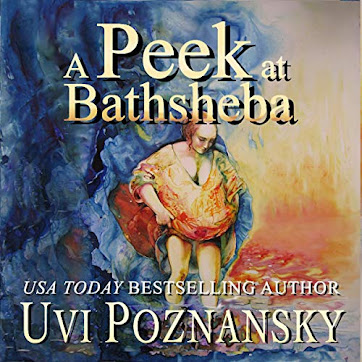 "In this second book of the David Chronicles, King David, now firmly ensconced on his throne, finally has everything he wanted, but things don't go exactly as he had imagined and, by the end of the book, he is older, wiser and much sadder than he was at the beginning. Told in Poznansky's distinctive style, the story is a lyrical delight..."

Posted by Uvi Poznansky at 8:48 PM