Joan P. Lane is a Jamaican born author of mystery and suspense. Her book, The Tangled Web, is a story of international web of intrigue, nuder, and romance. I am thrilled to find her review of my novel, Apart From Love:

Amazon Verified Purchase(What's this?)
This review is from: Apart From Love (Kindle Edition) 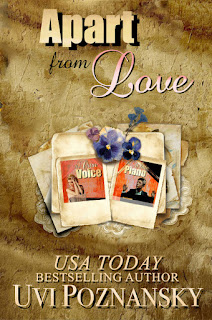 Apart From Love is the story of three people thrown together by unusual circumstances. An attractive middle aged man meets an uneducated teenage girl in an ice cream parlor. He is seduced by her and ends up marrying her much to the distress of his sisters and his son who returns home after a stint in Europe to find not only a step mother his own age, but that his mother, a concert pianist who his father led him to believe was always on tour, is instead in a nursing home in the last stages of a rare form of Alzheimer's disease.

Uvi Poznansky's words are like brushstrokes, painting a picture of these three tormented people and their environment in exquisite detail. She opens their hearts, their innermost thoughts to her reader, and shows the horror of Alzheimer's when father and son visit Theresa, his now ex-wife, in the nursing home. Despite the fact that she is completely incapacitated, Theresa hangs like a dark shadow over the new wife who feels she can never measure up to her.

Told by Ben the son and Anita the young wife, Apart From Love is a touching and unforgettable story of family conflict. I highly recommend it to readers of this genre.
Posted by Uvi Poznansky at 10:48 PM