The line reaches the margin, where it is punctuated by a red stain

"And then she left him.
He looks at the line. It is written in blue ink, pressed into the sheet of paper—vigorously here, faintly there—with his usual stroke, a stroke that drives through the spikes and valleys in the shapes of the letters at a steady slant. The line reaches the margin, where it is punctuated, unexpectedly, by a red stain.
Blotting it is bound to leave fingerprints, and so Mr. Schriber  decides to leave it alone. He lifts the paper by its corner—and a drop bleeds down; he lays it down on the desk—and the stain goes on spreading. Going back to his writing, he applies too much pressure on the pen—and the pointed nib digs into the paper. Taking a deep breath, he tries to compose himself. The pen is his weapon. The simple act of pulling it over the soft, white surface has never failed to calm him down. Letter by letter, mark by mark, it will soon draw him into a different state of mind."

So starts a short story titled And Then She Left Him, in my book, Home. Mr. Schriber tries to sort out his life, and to understand the reason why his wife has left him, by writing about their relationship. This story is great opportunity for me to capture some of my own thoughts about the process of writing, and the art of it.

It is only towards the end of this story that he begins to understand her point of view, and accept it:

But somehow his confusion starts to clear up. Now he knows, deep inside, how she must have felt all these years. Confined. Caged. He has a sudden sense of her anguish. No longer does he wonder why, why she would wish to hurt him. To his surprise, he finds himself coming, at long last, to accept her way of looking at things. He embraces what she has been giving him. He takes it in, her hate.
Is it too late for him? Too late to turn a new page? Can he hold on, just long enough to try, try to tell her he is sorry? At this point Mr. Schriber grips the arms of the chair and with great effort, lifts himself into it. Then he leans over his desk, feeling tired, and older than he ever felt before. From time to time he presses one hand to his temple, where a sharp pain shoots through him. His other hand clutches the weapon: his pen.
He can tell, there is not much time. The ending has come to him at long last; and so the battle between the writer in him and the editor, the battle that has been waged inside his mind, turns easy all of a sudden, and the triumph—joyous.
The pain recedes, and now he pours his heart out, filling one sheet of paper after another with his bold, fluid stroke, a stroke that drives through the spikes and valleys in the shapes of the letters, at a steady slant. In this landscape of blue ink, he writes without stopping, without editing or crossing anything out. He feels the urge. Time is running out.
Then Mr. Schriber lays his head on the wooden surface of the desk. Time to give up control. Time to give up... So he listens to the pen rolling softly away from his fingers, farther and farther out of reach, until there is nothing there, nothing but silence. He lets his eyes fall shut and at long last, falls asleep.
In his dream he views this last sheet of paper. Its texture, seen at an extremely close range, is that of crushed, flattened pulp. He notes each and every fiber. Yes, he imagines can tell them apart by the subtle changes in direction, and in the shades of their whiteness. The paper carries a faint but indelible imprint, a stain that has, by now, seeped through the entire stack. But if you passed a finger over it, it would feel dry to the touch.
At this moment the stain seems to have changed colors; it has turned dark brown, even inky in places. And here, close to the edge you could find a fingerprint. This is the writer’s signature, this and no other, because sleep came abruptly, before he had time to spell out his name. And there—scribbled with a strained gesture, directly above this signature—are these last words:
She said, Time to go. He asked her forgiveness, and then she left him. 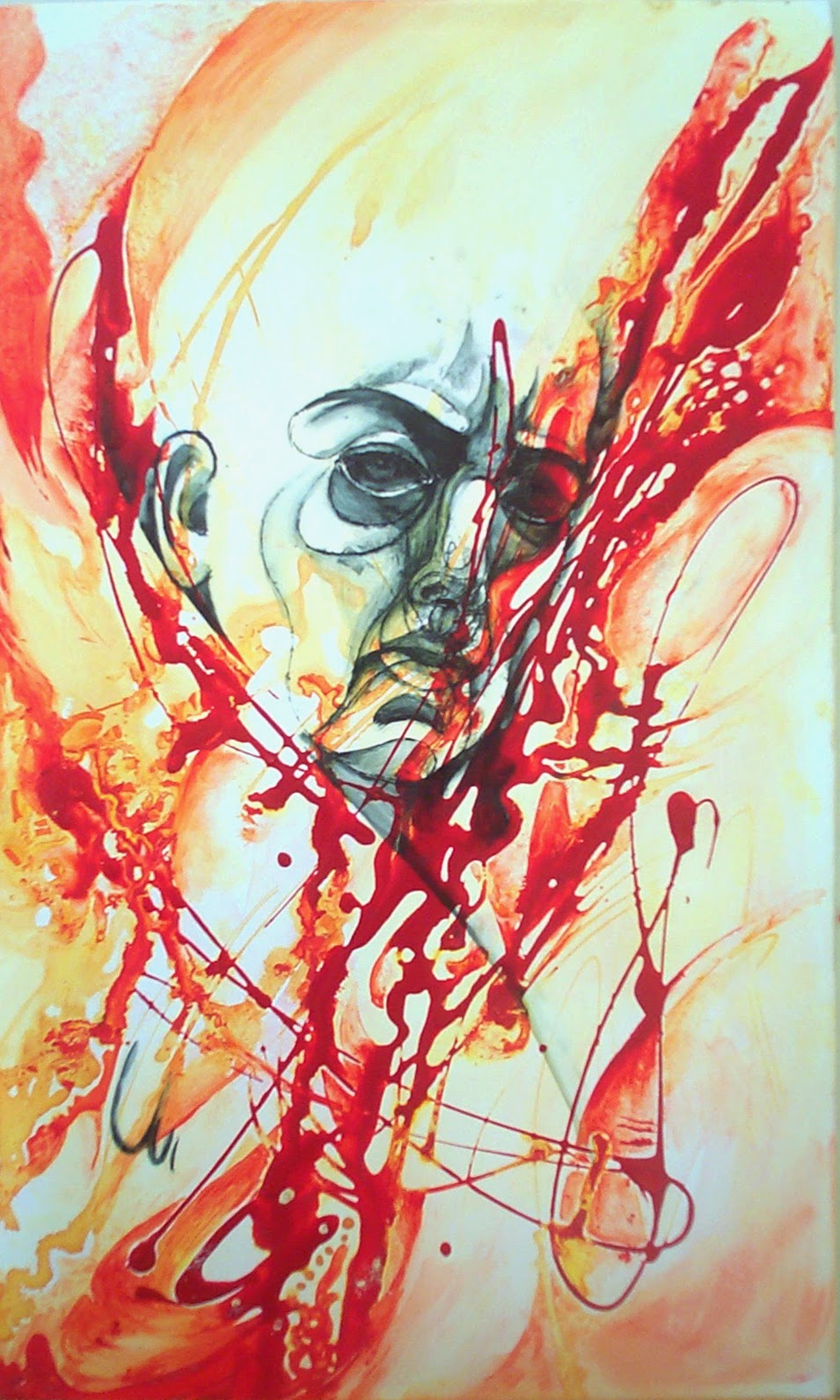 My watercolor and ink painting, Untitled

★ Inspired by poetry? Treat yourself a gift ★

"Absolutely Stunning!" "scenes of such exquisite depth and beauty"
Posted by Uvi Poznansky at 10:39 PM