I sit at the edge of the bed, utterly fascinated by her beauty. Her lashes are long, they flutter over her cheeks, and her hair waves around her face with the rhythm of her steps. It glows like copper under the flaming sconces, but when she crosses in front of the window it turns blue against the moonshine.
She glances at the collection of crowns, down there in my trunk, and leans in to touch some of them, perhaps to estimate their sizes, and the number of nations, the number of kings I conquered.
“Fine pieces,” I say, casually. “You can choose as many of them as you want.”
“No,” she says, drawling the word until it turns into a sigh. “I’m bored with it.”
“Are you? Bored with jewelry?”
By way of an answer she says, “After every battle Uriah brings me a little something, which he chooses for me out of the plunder, hoping I won’t refuse it this time.”
“Which you always do,” I say, half-asking.
“I have no use for such things.”
“Then, what is it you want?”
“Who knows,” she says, vaguely.
Aroused, this time by curiosity, “You must know,” I say.
“But,” she says, teasingly, “I’m not going to tell you. You, of all people, would never understand me.”
“Why not?”
“Because,” she says, waving a hand at the open trunk, where my treasures are strewn about, and at my bed.
“Because what?”
“You’ve been blessed. You possess so much that you can’t begin to appreciate your luck. So many things, so many victories, women, children.”
With that, she bends over a pile of maps and other scrolls of papyrus.
Pushing them aside, Bathsheba fingers the surface of my desk, where my firstborn child, Amnon, carved a little face—perhaps of his half-sister, my precious baby, Tamar—into the wood. Bathsheba strokes the childish, uneven sketch, and brings her hand to her lips, cherishing the touch of it.
And it is then, at the sight of a tear welling in her eye, that I ask myself, What does this wooden surface, scarred as it is, mean to her? Is she moved by the expression of love, or by the face of a baby?
After so many years of marriage, with a husband as doting as Uriah, she is still without child. And with her reputation—about which she can do little, because she is, after all, a soldier’s wife—Bathsheba must have been with many men before me. Still, she is childless. How else can you explain this fact, but by assuming she is barren?
For other women this is a curse, but for her—for both of us—this may be a blessing in disguise. If she opens her arms to me and takes me in I would not have to be careful with her. We would take pleasure in each other, without having to worry about the consequences. 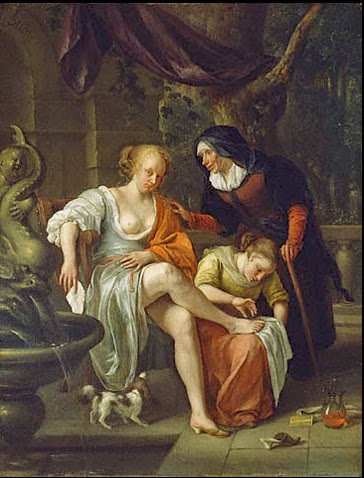 Bathsheba after the Bath by Ian Steen 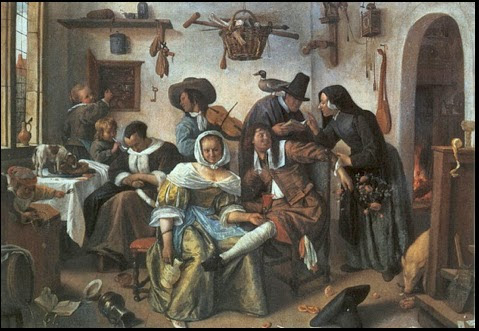 My trilogy,  The David Chronicles, is greatly inspired by art. One of the most enjoyable artists on the subject of David and Bathsheba is the Dutch painter Ian Steen. He treats Bathsheba as a soldier's wife, a woman of questionable morality who  enjoys a drink at the local pub when her husband is away, serving his country on the frontline. Here are two paintings, in which he depicts the moment when she gets David's invitation to his chamber. In both paintings she seems a bit tipsy. Note the dog--symbol of being faithful--barking at her feet in the first painting, as she contemplates David's proposition to come to him...
★ Love historical fiction? Treat yourself to a gift ★
Historical Fiction with a Modern Twist...
The complete series:
The David Chronicles 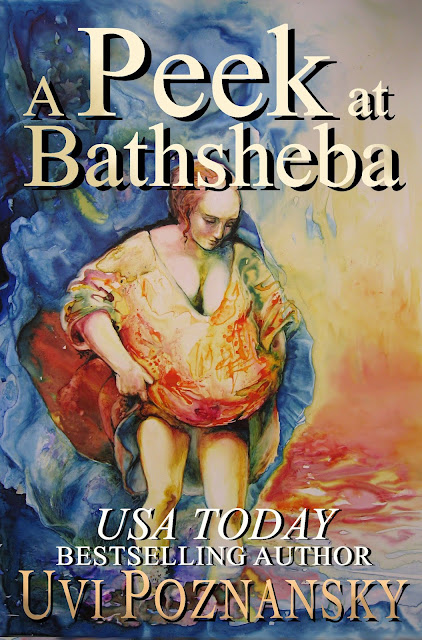 Posted by Uvi Poznansky at 7:44 AM