Thomas Jerome Baker has written books in the following genres: romance, historical fiction, autobiographical, sports history/biography, and English Language Teaching. I am thrilled to find his review of my trilogy, The David Chronicles:

By
Thomas Baker "Thomas is the Past-President of TESOL Chile (2010-2011). He is the Head of the English Department at Colegio Internacional SEK in Santiago." 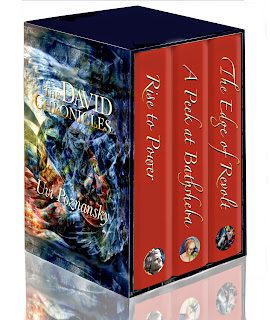 This review is from: The David Chronicles: Boxed Set (Kindle Edition)
God called David “a man after his own heart”. The first time we see David in the Bible is when the prophet Samuel comes to Jesse’s house looking for the next king of Israel. King Saul had been rejected by God—though he still sat on the throne. God said in 1 Samuel 13 that He would remove the kingdom from Saul and give it to a “man after his own heart” (1 Samuel 13:13, 14). In chapter 16 Samuel went to Jesse’s house looking to anoint the new king.

David was Jesse’s son and the youngest of eight brothers. Samuel looked over the other brothers and knew that God had not chosen any of them. Samuel asked Jesse if there were any more sons to consider. In 1 Samuel 16:11 Samuel said that he would eagerly wait until David came from the pasture where he was tending the sheep. Samuel anointed David as king even though he was still a young man. We don’t know how old David was when this took place, but it is commonly believed that he was just a boy between the ages of 8 and 12.

What author Uvi Poznansky does in "The David Chronicles" is give us a fresh perspective on the story of David. David's story is common to us all through our reading of the Bible. In the hands of Poznansky, it is an extraordinary, fascinating and ambitious literary endeavour. Making use of artistic license, this story is like nothing we have ever heard before: from the king himself, giving the unofficial version, "the one that could not be allowed to be told or written." This makes use of our ability to suspend disbelief, and enjoy the story for what it is, without reference to the reality we are familiar with. It's a fascinating and irresistible proposition, recognizing that all humans share the "urge to tell all." David, freed from the constraints of his biblical identity, indeed, tells all... ** I was given a complimentary copy of this book in exchange for a fair and unbiased review.
Posted by Uvi Poznansky at 1:56 AM