And oh, her face... The innocence in her eyes

The old woman opened her mouth to answer, but before she could utter another word, three things happened all at once: her eyes fell upon me, the girl clapped a hand over her heart, and the master of ceremonies could be heard behind them, stepping out to the center of the stage.
He bowed to the audience and cheerfully announced, “And now we take great pleasure to present the youngest star of our program, miss Natasha Horowitz!”
“Go, go, you go, girl,” said her mama.
But to herself she mumbled, “Lordy Lord. Let’s hope these GIs have some taste for something classical.”
She reached over her daughter’s forehead to adjust the feather in the little draped turban, which was whimsically designed by knotting together a couple of scarves. On other women, especially of the working class, such a hat would seem practical, as it was easy to create at home and kept the hair in place. On Natasha it added glamor.  Impatient with all that fiddling over a feather, she removed it.
Out of the hat cascaded the most gorgeous, shoulder-length red hair, with a curl at the end of it, the tips of which were wet from the rain. The girl shook her head so as to let the drops fly out, slipped out of her coat and stepped out into the spotlight, without her notes.
Meanwhile, her mama turned upon me. She set her fisted hands firmly on her hips and took a big gulp of air, letting her breath expand inside her as if she were a balloon. Then she looked up at me trying to stare me down, as if I were the enemy.
“Who’re you?” she asked, and without waiting for a reply she grumbled, “Go away! Go back!”
Up to that moment I had considered myself a fairly disciplined soldier, but the way she glared at me made me feel quite naughty, which on the flip side, compelled me to live up to a different reputation.
So feeling an urge, a sudden, irresistible urge not only to make an impression on the daughter but also to spite the mom, I slipped forward through the opening, and came onstage striding ahead of Natasha. Facing the audience I blew my cheeks, rather theatrically, into an imaginary bugle, which gained me a round of applause, as everyone thought my act must have been part of the show.
Then, with great flamboyance, I took the non-existent brass instrument out of my lips and clutched it to my heart, before making a spectacular leap offstage. While in flight, I totally forgot the injury I had suffered to my shoulder, only to be reminded of it, with a sharp shot of pain, upon landing. Stumbling onto someone’s lap I tumbled further down onto the floor, from where I raised up my eyes to watch Natasha.
She came to stand at the edge of the stage, with a light from above focused upon her, which allowed me to see her clearly for the first time.
Her light-pink dress hung just below the knees. It hugged her figure, which was slim and straight like a pencil, with barely any curves. Under the squared shoulders, which were then in fashion, her scrawny arms hung by her sides as if she didn’t know what to do with them, except for the long, delicate fingers that of their own, played in the air.
And oh, her face! Framed by the lovely chestnut curls, it was pale, and so were the freckles on her nose. This kid could be no older than fifteen. She was separated from the rest of us not only by the height of the stage and the radiance of the spotlight but also by the innocence in her eyes. 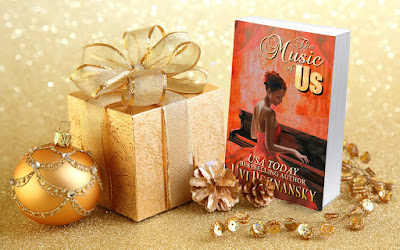 "A powerful and poignant novel that will grip at your heart strings ... a love story that invites the reader into a romance..."
- Chief, USN Ret...VT, Top 500 Reviewer

Posted by Uvi Poznansky at 3:20 PM