You chose the wrong side in this fight

The front door opens. A big guy in a cowboy hat too small for his head walks in. Close set eyes lock on her, and he comes straight to her table. In an accent that sounds like Eddie and Senor Valdez, he says, “Hank Sibley’s buckle bunny. Just the woman I want to see.” Her eyes lock on the scar along his jaw. The man from the VIP area at the rodeo earlier. The one who delivered dois cervejas to her and Senor Valdez. She tries to look and sound casually surprised when what she feels is terror. “What?” With one hand, she covers the buckle Hank had playfully secured around her waist earlier.“Don’t play any dumber than you are.” His voice is cutting, his eyes dismissive in his olive face.Inside rages bubbles up to mix with her terror. “I don’t know what you’re talking about, and I’m certainly nobody’s buckle bunny. I’m just a singer. I played at the Buckin’ A the last few nights.”He shakes his head. “I know where you played, but a thing is at it appears. And you appeared here with Hank Sibley.”“I’m on the road to my next gig in Billings.”“You chose the wrong side in this fight.” He slides into Hank’s chair. “You need to leave.”He pats his hip. “This is a gun in my pocket. You’re going to follow me to the parking lot.”“What do you want from me?”His eyes bore into hers. “If you do anything stupid, I shoot someone. Maybe you. Maybe that teenager waiting people. Maybe the grandmother with the babies by the door. I don’t care who. Got it?”She swallows. Hank really had gotten the wrong people mad. She hopes her prayer wasn’t too late. If this guy was here for her, this could mean Hank escaped. “Got it.”He stands, and Maggie follows his lead. He gestures for her to walk ahead of him, then does it again impatiently when she hesitates. Her legs feel wobbly and blood rushes from her head. She steadies herself with fingertips on the table. Come on, Maggie. Come on, she tells herself. Finally, her legs move, and she shuffles forward. Inspiration strikes. She stops. “I have to go to the bathroom.”“Not now.”“But—”“I said not now.” His hip and the hard metal of his gun bumps her from behind. “You’ve got two seconds until I start shooting.” She feels his hand move into his pocket, and she musters up the courage to move again. He trails her to the exit of the restaurant. Maggie tries to make eye contact with people, but no one pays any attention to them. Maybe the waitress will see I’ve walked the check and come after us. But that will be no good, if this Neanderthal keeps his promise to shoot. He opens the door, indicating she should go first. The night wind bowls her over, hot and hard, like it wants to push her back into the safety of the diner. He grabs her elbow.“Ouch.” She tries to yank away. “Where are you taking me?”His grip is steady, but he doesn’t answer. He marches Maggie beyond the reach of the lights from the street and from Western Sky’s. They reach a boat-like sedan, decades old from the shape but well-preserved. She can’t identify it in the dark. He stops at the driver’s door, reaches in, fumbles around, and pushes a button repeatedly.“Damn old piece of shit.” He propels her ahead of him. “Around back.” He opens the trunk with his key. Maggie’s heart is a drumroll in her chest. He’s going to put her in the trunk. There’s no way she can let that happen without a fight, because whatever he does to her somewhere else will be much worse than what he can do here. “Are you looking for Hank? I can tell you where he is.” She unbuckles her belt and slips it into her hand behind her back. Her fist tightens on the belt, and she tenses, ready.“I couldn’t care less where he is. You’re my assignment.”“But why? I don’t get it.”“He disrespected the boss. The boss always returns the insult. You’re Mr. Sibley’s punishment. Now, you can get in, or I can put you in.”“Aren’t you going to move the tire over? I won’t fit.”He glances at the interior of the trunk. Maggie grits her teeth. With all her strength, she whips the ten-pound belt buckle into the side of his head, then rears back, ready to do it again. He falls forward. She lets the belt drop. With strength she didn’t know she had, she grabs him around the thighs and topples him the rest of the way in. As she slams the trunk, he’s already recovering and beginning to thrash. She pauses with her weight on the trunk lid, listening. He’s groaning, cursing, kicking. It hasn’t been half an hour. Her breaths come fast in panty gasps. She can’t leave Hank. Can the thug get out of the trunk? She has no idea. There could be a latch. Or he could bust it open. Cautiously, she stands, watching the trunk latch and at the ready with her giant belt buckle. His efforts seem futile, and she finally decides she can risk it. He’s not going to break out. She has to get back to where Hank expects her to be waiting for him. Shaking, she puts the belt back on, looking around her to see if anyone had seen what happened as she does it. But she’s completely alone except for the struggling man in the trunk.She takes a few deep breaths, each less shaky than the last. “I’m nobody’s buckle bunny, asshole.” 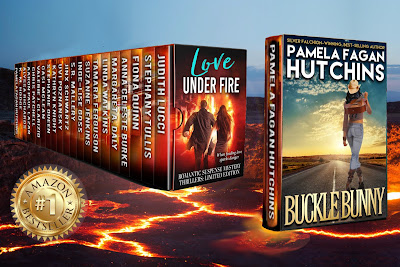 ★ Love Romantic Suspense? ★
Get these 21 brand new novels, never before published, in one boxed set!
No longer available
Love Under Fire
Posted by Uvi Poznansky at 8:33 AM