Vlad clutches my wrist, forces me into the corner, and hisses in my ear, “Ashley Winters, did you call the cops on me?”
“No—”
“Oh, why do I even bother?” Vlad slaps my face so hard that it makes my skin burn. “I always knew you can lie with a straight face. Especially when your life depends on it.”
I try to wriggle away from him, but slip over the confetti strewn around. Vlad kneels by my side, puts his knee between my legs, and leans closer, his hand clamping my throat. And while my windpipe is pressed—while I’m fighting for air—he mutters, between clenched teeth, “Mamushka knows best.”
The last thing I see before my lights go out is Michael, punching him in the face.
The first thing I hear when I regain consciousness is his voice. “Oh please, sweetheart,” Michael murmurs. “Please, wake up.”
I find myself in his arms. His touch feels so good. I’m so happy he’s here. At last, I’m not alone. But other than his face, I barely recognize anything else around us. Vlad is nowhere to be seen and, in the span of a few seconds, the entire space has fallen into chaos.
I’ve thought that all hell breaks loose is an exaggerated figure of speech—until this moment. I see the old woman reaching to grab the handle, which must be scorchingly hot to the touch. With a sudden grunt, she tears open the inner door, then shakes her hand, shakes it fervently. It must hurt like hell.
A roaring fire blows in her face. It seems almost human, the way it bends over as if to smell her hair, taste the sleeves of her dress, the hem.
In utter shock, Mrs. Komarov stumbles backward, one step, two. Falling to the ground, she screams in terror, and the flames recoil for a second before bursting out at her even brighter than before.
Meanwhile, the first cop comes in. Others follow, weapons drawn. The gangsters step over Mrs. Komarov and over each other in a mad rush to flee. Confusion sets in as they scatter every which way, unclear where to go: away from the blaze—or away from the police?
Michael and I make our way through hissing smoke to save the old woman. We peer at the scene between one tongue of fire and another. A hairy leg is spotted here, an arm there, and on occasion—Voola—a snake, tattooed around an elbow.
I suck in a deep breath and duck through the flame in search of Mrs. Komarov. I’m guided by her frantic shrieks as a burning beam has collapsed next to her. Her babushka, now removed from her head, is now held with her quivering fingers, covering her mouth and nose from the smoke. We grab her arms and drag her together step by step around the overturned table, across a puddle of spilled Okroshka soup, and out to the street, where an ambulance has just arrived.
We carry her past the cops who surround the place and past the firefighters who are setting up their equipment. The old woman complains, her voice scratchy from smoke inhalation, about the stinging in her eyes.
Medics arrive. They apply medication over the burn on her right side to relieve the pain. They also suggest we get tested for COVID-19.
“Oh no,” says Mrs. Komarov. “I heard all about the nasal swab test.”
One of the medics explains, “It captures a lot of viral material concentrated in the back of the nose—”
“It is notoriously unpleasant.” She coughs. “You are not going to stick that thing up my nose!”
“No worries. We offer also a saliva test. It’s easy. All you have to do is spit into a sterilized container, which is then sent to the lab for processing.
“Fine. Spitting I like.”
Strangely, the one person missing through all of this is her son. For a second, I think I see him across the street, watching us. A sudden rush of adrenaline sends me dashing over there, ready to point him out for the cops—only to realize there’s no one there. What I saw must have been a phantom of imagination, a dance of flames. 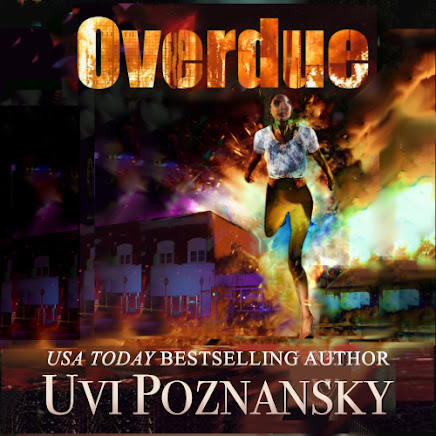 The cover depicts Ash as she escapes the fire she set in the LA headquarters of the Russian gang. My art is storytelling. In many thrillers you have the protagonist as a figure seen from the back, running away as if being chased or chasing. By contrast, I show Ash coming towards us, nearly falling into our arms, so we can directly relate to the daring it takes to do what she does in spite of the fear.

I also gave a lot of thought to making each part of this cover shimmer with texture and light, creating an explosive, dynamic urban backdrop for her.

Posted by Uvi Poznansky at 9:31 PM