Without me, you will hit rock bottom before you know it

The celebration has just gotten underway in the main space. Hearing the hoots and the chest beating, I sneak out of the back room to watch the gang up-close.

Colorful confetti—leftover from the out-of-business party store that used to rent this space—is being tossed all around. Vlad himself is blasting out one party popper after another with unbridled delight.

His men, too, are in a festive mood. A bit tipsy already, they crowd around the long table, now covered by a paper tablecloth. Mrs. Komarov stands at the head of the table, ladling cold Russian soup from a large plastic container into plastic bowls for all of them. From here, it smells a bit like sour milk.

“Thank you, thank you!” says the first in line, having gulped it down hungrily. “What a delicious Okroshka, with boiled potatoes and raw radishes and cucumbers. Just like my mother used to make.”

She gloats ever the compliment. “More food yet to come,” she says, with a matronly smile.

Some of the men set crates of beer at Vlad’s feet, others—pour drinks over his head. The anointment is rowdy, but Vlad seems to bask in it.

I notice that the main door has been unlatched, perhaps to bring in the food. This is my chance to flee—if not for Mrs. Komarov. She is the first to notice that I’ve slipped out of the back room.

“Why are you here?” she demands, gruffly. “Did I not tell you to stay put? Your job is to figure out how I can shake the damn insurance companies off my back—”

“No,” she counters, shaking the ladle in his face. “You stop!”

He claps a hand around my waist and pulls me to his chest. His mouth reeks of cheap beer. “Let her join us! What’s a party without a beautiful woman?”

Her face reddens. She grabs my arm angrily and wrenches me from his hold.

Her eyes blazing, she tells him, “Zacroy rot!”

“Shut up? Me?” Vlad gnashes his teeth. “How can you even say that—especially now, when everyone here celebrates my success? Don’t you see, I am on top of the world?”

Mrs. Komarov gnashes her teeth, way louder than he did. If this were a competition, she would get the gold. “Without me, you will hit rock bottom before you know it. So, pay respect. Do not dare cut in when I am talking. And I mean, ever!” 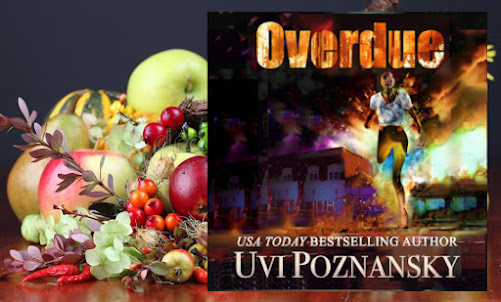 "There's never a dull moment in this one ... and that's just the way I like it."
~Aurora Dawn, Audible reviewer
Posted by Uvi Poznansky at 4:13 PM