X’s and O’s for Kisses and Hugs

"She locked herself in and started writing letters, some of which were never sent, for fear of revealing too much of her loneliness. Other letters she embellished along the margins, with a hand heavy with years but with the manner of a schoolgirl: She embellished them with pink flowers and long sequences of X’s and O’s for kisses and hugs, and then she sent them to that foreign sounding address, so that her grandchildren, who rarely came to visit, would know she loved them.
How would a doorknob feel to be barely touched, its latch rarely released, the lock always bolted shut? How would it feel to be in the grip of rust?
She glanced at the doorknob. Would it retain a memory of her touch, even when she is gone? Would it keep, in its own transparent ways and despite all that polishing, the layers upon layers of all their fingerprints?"

This is an excerpt from a short story which I titled Even One Mark. The inspiration for it came from what I heard on a phone call from the other end of an ocean, from Israel: it came on my birthday, so for a moment I thought that congratulations and good wishes would be the topic of the conversation--only to learn that unfortunately, my mother-in-law had just passed away. In the early days of my marriage I perceived her, as most young brides do, as a formidable force, and it took me many years to look past the power game. To my surprise I found out not only that I appreciated her strength and her knack for survival, but that I loved her dearly. And so, I wrote this story to reveal the softer, most volunrable side of her character.

This is how the story ends:


"The wind whipped the pages out of her lap. They flew around her, some settling to the ground, some flipping higher, flapping into a big clutter in the air, then floating dreamily away across the landscape. In years past she would get up, catch them one by one and stack them back, with a strict attention to order; but now she didn’t care anymore. For a moment she thought she could see that page, the one she had marked X with a trembling hand. There it was, a white glimmer soaring out of reach above her in the wind. And then, in one puff, it was over.
Somewhere inside, a doorknob broke. A door flew open." 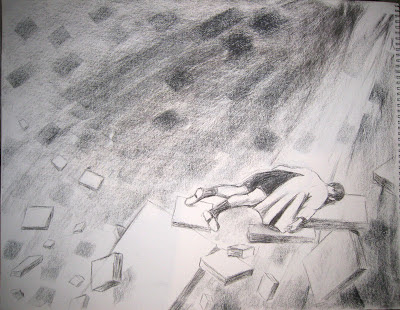 I drew this charcoal sketch a couple of weeks ago with a similar feeling of  loss. 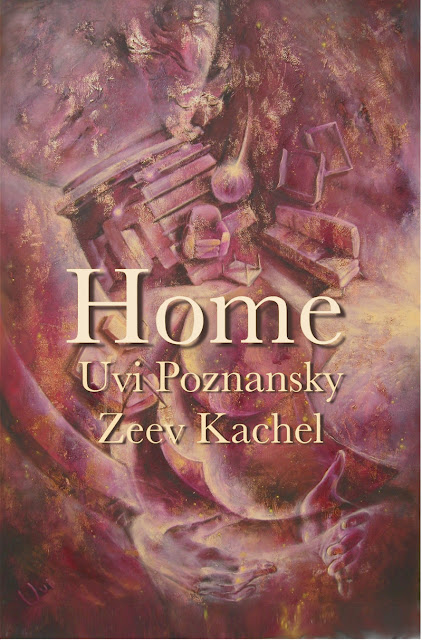 "HOME is an invitation, a very personal one, and should not be passed over"
Posted by Uvi Poznansky at 4:47 PM