I am thrilled to find this review, written by the high-ranking Amazon reviewer and author of historical fiction books, Christoph Fischer. This is what he says about The David Chronicles: Trilogy: 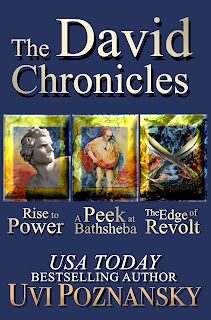 "Rise to Power (The David Chronicles)" by Uvi Poznansky is another eye opening book, based on a biblical theme but written with a modern mind and perspective. Without corrupting the original historic-biblical story Poznansky takes us into the world and minds of well known biblical figures, such as the first King of Israel, his rivals and his lovers.
A man of flesh and blood, with sexual urges, pride and huge powers of reflection and analysis David is a superb character, real, with bite and of the human race - quite different from the biblical myth that has been created around him.
We see him as he slowly rises to power, from a small soldier to military leader, his military campaigns, his ambitions and the rivalry over the throne; we see the husband to Michal - his first wife and the sometimes strange 'renaissance' man. The novel is historical fiction, biblical fiction and simply excellent fiction.
“A Peek at Bathsheba” by Uvi Poznansky is yet another one of her great Bible-inspired books. Nobody understands better to utilise existing stories that many of us are familiar with already – at least to some extent – and give them a new lease of life, a new angle and makes us see different sides to those historical, religious and mythical characters. Who was David really? A hero or a product of his circumstances, of coincidence and skilled manipulation?
“The Edge of Revolt (The David Chronicles Book 3)” by Author Uvi Poznansky is another amazing and spell binding book about the biblical King David. We meet him at a progressed age where his family life is turned upside down by the sexual escapes of his children, mainly that of his son Amnon.
To see his own reflection in the son who inherited the lust from David himself was one of the most extraordinary moments in reading this novel for me.
Such are the thoughtful illustrations of a well-known biblical character, modernised by language and brought to contemporary relevance. Humanised to flesh and blood we get to experience what often had the mere relevance as a myth, fable or saga. This is a powerful portrayal of the man behind the myth. Not always as we would like to see it, but brought to life with poignancy and depth.
The writing is sharp and beautiful, the characters hard to forget and the story well developed.
A psychological profile, a story of king, his family and ancient Israel, this has something for historians and fans of modern literature. Artful, courageous and powerful.
Posted by Uvi Poznansky at 7:20 PM