Who will decide King David's successor?

I am honored to get this review is from a reader who is not only a truck driver who has seen most of the continental US through her work, and who is a poet as well!  Cindy J. Smith is the author of Voices In My Head and other books. This is what she wrote about my new release, The Edge of Revolt: 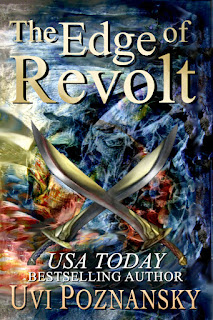 King David is revered for his poetry and psalms. Uvi has looked closer at the man and offers us King David as a flawed person. This final book in her trilogy takes place at the end of David's life. Bathsheba wants David to name their son Solomon as his heir to the throne despite the fact that he is 4th in line. The book goes on to relate the tale of David's oldest sons and their fall. It shows that although David united the tribes of Israel under one crown, his parenting skills left much to be desired. When his oldest rapes the second son's sister, David lets it slide. He is afraid of coming down too soft or too strong and just lets everything go hoping it will disappear. But that is not what happens. Rage burns inside his second son until he finally takes justice into his own hands and murders his older brother. David is again unwilling to decide what to do. This time it leads to an attempted overthrow. When he gets his crown back, David is again faced with his old age and the knowledge that his third son is trying to take over the kingdom. A well written book. David is humanized and an understanding of his decisions is given. Loved the book and the trilogy.
Posted by Uvi Poznansky at 4:26 PM