A well-presented, detailed, and thought provoking interpretation of biblical history

C. B. Blaha is an up and coming author with books such as Dominoes and The Trip. I am touched that she posted this review for my novel, The Edge of Revolt:

By
Cynthia B. Bergstrom
Verified Purchase(What's this?)
This review is from: The Edge of Revolt (The David Chronicles Book 3) (Kindle Edition) 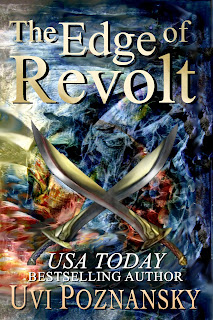 Just as Shakespeare revealed the very imperfect and timeless human aspects of prominent people in his portrayals, Uvi Poznansky has given us a King David with whom we can truly relate. Torn by his past and confronted by his present, David searches for truth and resolve. Haunted by his inaction after the rape of his daughter, Tamar, and murder of her rapist (his son Amnon) by his half-brother, Absalom, David is driven from his throne only to confront his demons before returning.

Ms. Poznansky’s character development is brilliant to say the least. I was captivated by her rendering of this biblical story and the raw emotion it evoked, and although this is the last book of her David Chronicles trilogy, it stands alone.

I highly recommend this novel to historical fiction buffs as well as anybody who enjoys a well-presented, detailed, and thought provoking interpretation of biblical history.
Posted by Uvi Poznansky at 8:27 PM