Say anything apart from love

Author of War Songs, Grady Harp describes himself as being ever on the alert for the new and promising geniuses of tomorrow. He is an artist representative, gallery owner, writer of essays and articles on figurative and all Representational art for museum catalogues and for traveling exhibitions, and an Amazon Hall of Fame Reviewer. I am honored that he has posted this five-star review for my novel, My Own Voice: 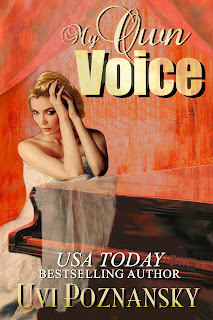 Uvi Poznansky wears a coat of many colors. Originally from Israel where she studied Architecture and Town Planning then moving to the US where she studied Computer Science and became an expert in Software Engineering, Poznansky managed to combine the design elements of two studies into unique formats. And she has accomplished the same with the other side of her brain - making visual her ideas (she is an accomplished painter, drawer, and sculptor who has enjoyed exhibitions both in Israel and in California, her present base) and making words in poetry and in short stories and children's books. MY OWN VOICE was her first part of her novel APART FROM LOVE: Still Life with Memories and THE WHITE PIANO is the second part. Having read them together allows sharing the scope of what came before this book – and sharing that is important.
The synopsis of MY OWN VOICE (the cover of which is an excellent example of her compelling art) attempts to separate the two aspects of her this first installment: ‘Ten years ago, when she was seventeen, Anita started an affair with Lenny, in spite of knowing that he was a married man. Now married to him and carrying his child, she finds herself condemned to compete with Natasha’s shadow, the memory of her brilliance back in her prime, before she succumbed to early-onset Alzheimer’s. Despite Anita’s lack of education, her rough slang, and what happened to her in the past, Lenny tries to transform her. He wants her to become Natasha. Faced with his compelling wish, and the way he writes her as a character in his book, how can Anita find a voice of her own? And when his estranged son, Ben, comes back and lives in the same small apartment, can she keep the balance between the two men, whose desire for her is marred by guilt and blame?’
But for those who wish to see how parts one and two are joined, the following is offered: ‘The story of this elegantly designed novel is a dissection of a family life and the alterations that occur with the family framework both by intent and by happenstance. It weaves themes of disparate parents - an accomplished pianist Natasha married to the elderly Lenny who cares for Natasha as she descends into the darkness of Alzheimer's Disease and compensates by taking on a very young and uneducated, somewhat socially coarse redhead vixen named Anita - and the manner in which the couple's 27-year-old bright son Ben copes with the situation.'
Poznansky's unique way of unraveling this complex story is by making the `chapters' vary as told by Ben, as told by Anita, and as told by Lenny. She understands fully how to bring Ben's confusion about both his past life with his parents and the current situation with his mother's decline and his father's reactive compensation by bonding with a beautiful young, if raw, companion. Few authors would be able to pull off the manner in which the apparent polar opposites of Ben and Anita begin to bond and how Lenny integrates into their apparent clandestine relationship, but Poznansky has the visual and verbal and architectural skills to create this maze and guide us through it.
She capitalizes on the use of the chapters being related in the voices of the characters: Ben relates the situation as he remembers and experiences it in eloquent finely honed grammar while Anita speaks to us with the slang that at first can be grating but morphs into communication that allows the reader to experience the change that develops in her relationship to Ben. In other's hands this could become cloying as a technique, but with Poznansky's skill she uses it as an interface between evolving personalities that makes her story ring true.
So much more could be said about the manner in which the author brings understanding to the hierarchies of relationships - parental, couple, aging, developing, and ones influenced by disease, but that would be robbing the reader of the joy of discoveries that Poznanasky accomplishes in this profound novel. The title is so well chosen: the phrase of the title is the key that unlocks much of the fragile mystery that hovers here. Please read the entire novel to appreciate the beauty of Uvi’s gift. Highly recommended. Grady Harp, September 15
Posted by Uvi Poznansky at 1:34 PM