There rise the shriek of vultures


There, with their backs to me, they are: three silhouettes, drawn sharply against the gray, gloomy landscape. The horsemen in the center is the one I am watching with keen interest. He is tall, formidable, and cloaked. A ray of morning light reaches hesitantly for his crown, sets it afire, and then pulls back.
Ahead of him, the valley opens like a fresh cut. Thin, muddy streams are washing over its rocks, oozing in and out of its cracks, and bleeding into its soil. Layers upon layers of moist, fleshy earth are pouring from one end to another, then halting on a slant, about to slip off. And from down below, somewhere under the heavy mist that hides the bottom of the valley from sight, stir some unexpected sounds.
I wish I could ignore them. For a moment I am tempted to stick my fingers in my ears—but to do so I would have to let go of my lyre. Let go I cannot, because its strings may tremble in the air. My music may betray me, I mean, it may betray the place of my hideout.
So I go on cowering, trying to imagine silence—only to be startled once more: in place of the first birdsongs of the day, there rise the shrieks of vultures.
Sitting up there astride his stallion, the king hangs his head, which forces him to raise a hand to support his crown from slipping. In despair, he averts his eyes from the valley. 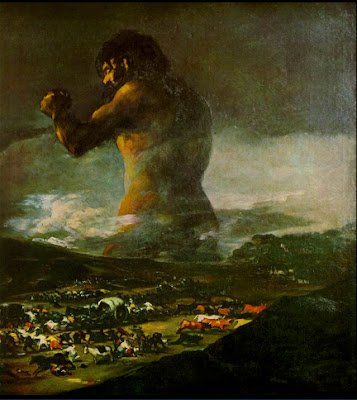 The Colossus by Goya

The Valley of Elah, from Picturesque Palestine, Sinai and Egypt
David describe the Valley of Elah, where he will soon face his enemy. I have visited this place when I was a child, and at the time it surprised me that the valley is so shallow and well, boring. I imagined that perhaps it used to have dramatically sloped walls, as befits the scene of an iconic battle. I told myself that perhaps over the generations dust has settled over it and covered the rocky slopes, hiding the drama.
Before writing the scene, I also looked at a lot of paintings in the history of art. For example, here is The Colossus by the spanish painter Goya. He depicts the valley as a gently sloping landscape, over which looms the figure of a giant. For the moment his attention is not on us, and not on the valley, as he is preparing to strike in a different direction, but that can change in a moment.
Another example is a drawing called The Valley of Elah, from the book Picturesque Palestine, Sinai and Egypt. The artist must have drawn the landscape right there, and imparted a sense of desolation by choosing a time of day when the shadows draw longer.
Having looked at many art pieces I set them all aside, and wrote the scene from imagination. 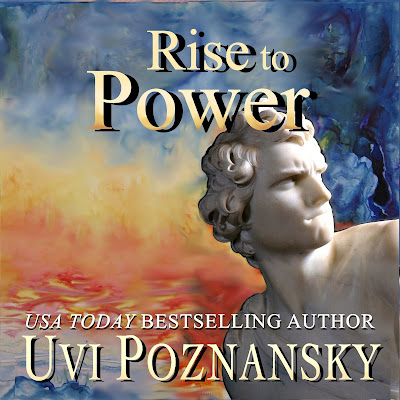 Posted by Uvi Poznansky at 7:13 AM