I am so excited to present a new talent, with whom I collaborated to produce the long-awaited audiobook edition of my historical fiction novel, The Edge of Revolt. I went through the audition process, listening to many actors, in an effort to find just the right voice for this fascinating, complex character of David, a king in the winter of his life. And I knew from the moment I heard Bob Sterry that he would be perfect for the role.

So, let me tell you about him. Bob is a voiceover actor, writer, singer, occasional stage actor and humorist. Originally trained in the UK as research analytical chemist, he immigrated into the United States in the seventies, working as a wine waiter in New Jersey, a fork lift truck driver in Connecticut, and spent his professional career in the marketing of scientific instruments and services in New Jersey, Hong Kong and around the world. 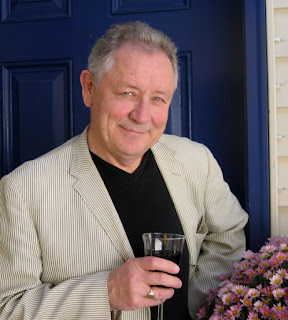 It was not until he started writing short articles and poetry in the nineties that his creative talents found an outlet, and he began to sing seriously in choirs and extemporaneous groups. In 1999 he and his wife Anne-Louise Sterry, a well-known speaker, singer and storyteller, founded a short lived but much loved faux cowboy wannabe band, ‘Anne-Louise and the Cascade Urban Cowboys’. Discovering his on stage talent he took the step to starting his own show of songs and spoken word. His singing is Cabaret satire with Broadway and the English Musical Hall grinning in the wings with a nod to the classical style. Recent shows were ‘The Bob Sterry Atomic Summer Show’ and ‘The Book of Bob’, and ‘A Sterry Sterry Night’ with Anne-Louise Sterry.

Adding Voice Over work to this was an obvious step. Bob's clear ennunciation coupled with strong language skills and familiarity with technical terms result in excellent communication. His sense of humor and acting skill is perfect for tongue in cheek promotions. Thanks to voice coach Lesley Bailey and recording genius Marc Rose at FuseAudio Design Bob offers his voice to anyone who needs it.

Bob is passionate about cycling, cooking, language and literature. Here is a beautiful poem he wrote, which resonates with me not only because it is so personal but also because it bears a relationship to the story in my book: the story of a father who loves his son dearly and struggles to hold on to the closeness between them.


I Saw A Little Guy Being Born
I saw a little guy being born
I cut the cord that tied him
I held him in my arms
With his dark damp hair
Wetting my hospital gown
And his dark eyes looking up
Looked right through me
And saw something I could not
And perhaps it’s best that way
Even then he was serene
And had the knack of sleep
A skill he has preserved
Lying so neatly in his bed
A lovable length of boy
I saw a little guy grow
Into a lovely boy
Who spoke quietly
And was always gentle.
I saw a lovely boy grow
Into a slender young man
And felt all his wounds
Like my own, once again
Deep and full of rage
I can sense his young anger
And his musical desire
Waiting for an unknown muse
To strike him and lead him
Somewhere….
I see a slender young man
I cut the cord that ties him
And watch his dark hair
Disappear from my view
From my damp eyes.

Of all the pains in the world we have to endure those inflicted unconsciously by our children are some of the hardest to bear.

More about our work in the coming weeks... Stay tuned! Meanwhile, check out Bob's links:

Posted by Uvi Poznansky at 1:27 PM