One way for Vlad to avoid me, avoid paying the price for his crimes, is to play dead; another is to play dying. And who knows, perhaps it’s for real. Perhaps it’s not a game.

Still, I can’t help but remain on guard, even if to others, it may seem pointless. Last time I saw him—about half a year ago—he lay contorted on the stretched hospital sheet, seemingly immobile, and never once lifted an eyelid to meet my gaze, which brought pity to my heart—but didn’t expunge the fear.

I keep telling myself there’s no reason anymore to be cautious. I shot him, and now he’s said to be in a coma. About that, I have my doubts. Having spent enough time in his company before the hit, I know him all too well. Vlad rejoices in the pain he inflicts. To him, it means being in charge. He is not likely to relinquish it. Even if his power slips away, it’s not going to be for long.

My brush with his Russian gang is something I’d like to forget. It left me struggling to piece my life together. Like an ink stain, the memory of what happened to me in their hands is somewhat shapeless and yet—indelible. Perhaps the only thing I can do now is give it more definition. If only I can learn his secrets.

I try to think the way he does. What would Vlad do now that the police arrested most of his gang, now that he is no longer in control? He would bide his time until finding the right moment to grab it again. And what better place to lay low than a hospital bed?

My boyfriend, Michael, says I’m overly suspicious. There’s no way to fake being in a coma. I do want to believe that—but having been diagnosed a few months ago as a vegetable myself, I know from experience that faking it is not entirely out of the question. Especially when you start to regain your senses, and no one but you knows you’re already alert.

So I just smile at him and say, “Time will tell.”

Then, we move on to other subjects such as my job search, which unfortunately is next to impossible during the pandemic. Since my recent move to LA, I’ve been living out of my secondhand Ford Escape. This is merely a temporary measure, meant to reduce my expenses until I get hired. But these days, the job situation looks increasingly dire. Temporary is a tricky term. Who knows how long it can turn out to be?

Michael has been begging me to stay in Irvine with him for a few months, at least until a vaccine is developed, until it becomes widely available and the pandemic is over. I’m so tempted, not only because being together will make my life so much easier but also because when we’re apart, I miss him.

Ma doesn’t approve of Michael. For me, that adds a naughty allure to his proposition. She hates that he dropped out of college. In her eyes that’s a sin, even if he committed it to start his own software company. On the other hand, she worries about me living by myself in an unsafe place. So she will definitely understand if I accept his offer.

Even so, I haven’t. Blame my resistance on wanting to make something of myself. Blame it on being stubborn.

Michael is a software engineer who works out of his own garage. His most recent project is nothing short of fascinating. He has fused several types of scans from a real patient to create a view of the brain, which doctors can manipulate in virtual reality from multiple perspectives. The experience feels a bit like flying through a detailed, lifelike organ.

“Michael,” I say, “what does a comatose brain look like?”

“Please, not that again.” Michael drops his head into his hands. “You’re totally obsessed with that Vlad.”

“Sweetheart, you owe nothing to that creep.”

“You’re right. I owe it to myself and to others, too, which I realize whenever I hear stories about survivors like me, struggling to find their way back to normal.”

For a moment, Michael is silent.

“All right, Ash, I get it,” he says at last. “I’ll contact the hospital and check on him for you. And next time you come to Irvine, we’ll go see him together.”

“Thank you, Michael.” I blink away tears. “It may be my last chance to ask him what I need to know; his last chance to confess. But I doubt he will.” 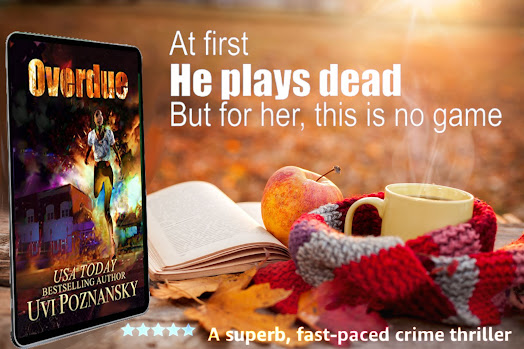 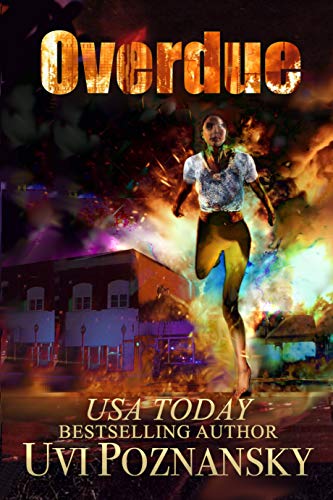 "Overdue is an exciting crime thriller with an intriguing plot and bunches of twists and turns that will keep you reading until the very end."
~Tammy, Amazon Reviewer
Posted by Uvi Poznansky at 8:07 PM