My doubts make me realize what I already know. I’m in over my head.

I cast a quick look at my bathroom mirror and apply a dab of makeup over the little scar under the corner of my eye. Then I let my golden retriever, Browny, out into the backyard, but instead of rolling happily in the wet grass or sniffing the flowers in bloom, he just stands there, howling, as if to tell me not to leave.

With barely a thud, I close the door behind me and head out for my date with a someone I barely know, except for two critical things. He’s a doctor. Ma would love this little nugget of information, but not the next one. He’s married.

As I said, Michael should be the last to know. But I’m tempted to call back and tell him that love is not what I’m looking for, and neither is the thrill of having a secret affair.

Dr. Patel, professor of psychology and neurosurgery, is Chair of Neurological Surgery and Physical Medicine in UCI Medical Center. He is world-renowned for his expertise in aneurysms, arteriovenous malformations, neuro-ophthalmology, and deep brain stimulation. You don’t know what that last bit means? Neither do I, but if he performed it on me, it would explain feeling over-stimulated at times. Other times, I feel dead. I wish I had someone to blame for that.

Seriously, though: his resume is impressive, and his fame goes beyond mere paper credentials. During my stay at the hospital, the nurses talked about him with great admiration.

As I recall, they praised not only his skills but also his stable family life. According to them, if there was any vice in him, it was his constant quoting from scriptures. His bible thumping is anything but endearing, especially when it comes with that over-the-top note of authority. It annoyed me even during my coma.

To everyone but me, he seems like a perfect man. Which is a bit odd, because when I’ve decided to get him to ask me out, it’s taken little effort on my part—not more than sitting across from him at the hospital cafeteria and ever so slowly, crossing my legs.

Dr. Patel has led a charmed life—until now. His good fortune is about to end, because of one thing I’ve recently discovered about him.

He is a fraud.

Working with Michael on several of his software projects taught me a few tricks, especially when it comes to hacking. Yesterday, after a few false starts, I managed to get through the database firewalls of  Duke Institute Department of Surgery, listed as Dr. Patel’s residency on his resume.

My curiosity was innocent, at first. It was driven by a chance meeting with him when I came back for a visit at the hospital, last week. Dr. Patel didn’t seem to remember me, perhaps because I was no longer wrapped in bandages, no longer represented by fluctuations of body temperature, pulse rate, respiration rate, and blood pressure. Somewhat annoyed by being so carelessly forgotten, I needed to assure myself of his observation skills. I wanted to know that his medical insight was indeed as advertised: flawless.

Breaching the firewalls of the department turned out to be easier than expected, although there was a little nagging feeling of guilt for invading their records, as well as Dr. Patel’s privacy. In the process, my cellphone kept pinging with dual-factor authentication codes. I hope it wasn’t pinging this loudly at the other end, or at least that no one in charge of the database integrity was paying attention to me sneaking inside.

Ignoring the palpitations of my heart, I steeled myself, aiming to glance at his achievements during his training period for just a second. But the exploration extended to several long hours. And yet, by the end of it, there was no mention of anyone by that name during any of the years in question. I checked the information over and again, to no avail. He claims to have trained at Duke Institute, but his name is not listed there. Period.

What am I missing? Have I overlooked some part of the data? If not, why is there such a discrepancy? And what else is a lie in the account of his professional life?

My doubts make me realize what I already know.

I’m in over my head. 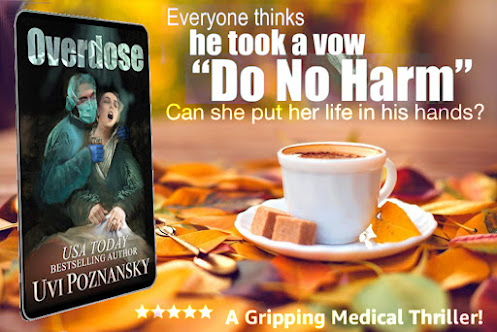 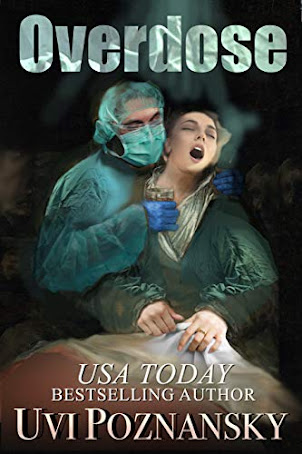 "About halfway through reading Overdose I got to thinking that it would make a great movie, a thriller to match anything that Alfred Hitchcock ever put on the screen (except maybe Vertigo). And then I thought 'If only Hitchcock were alive now. He would love this novel."
~Colm Herron, Author
Posted by Uvi Poznansky at 9:37 AM