New Review of Apart From Love

So glad! I must share. The first UK review of my book appeared minutes ago on Amazon, here in the UK and in the US.


5.0 out of 5 stars A Beautifully Crafted Triangle of Love,
By
A. Rose (Devon & Menorca) - See all my reviews
(REAL NAME)
This review is from: Apart From Love (Paperback) 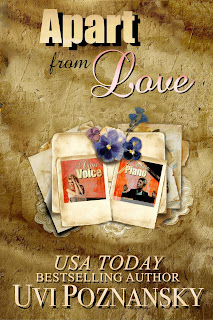 The story is told from the viewpoints of Ben and Anita. Ben is the adult son of Lenny who has been estranged from his parents for the past ten years, with Ben blaming his father for the break up of the family when Lenny and Natasha divorced. Anita is Lenny's new wife who is pregnant, the same age as Ben and also has an uncanny resemblance to Natasha, so much so they could have been taken as sisters - but in appearance only. Natasha was a beautiful and talented concert pianist with elegance and grace to match. Whereas Anita is rough, ill educated, dresses brashly and her speech is no better than `street talk'. What Ben didn't know was that even when he was a child at home living with both his parents, his mother was in the early stages of Alzheimer's Disease and that this progressed to the stage where Lenny divorced her and had her cared for in a home. The marriage wasn't always happy with Lenny having many affairs and flings but Anita, one of his flings, had been around for ten years or so before he married her following an unplanned pregnancy.

Without giving more of the story away, there are many facets to each persons story and all have their hopes, fears and revelations. The love between Ben and Anita which both of them hide as much from themselves as each other, is a slow burn, almost dangerous dance that is more in their heads than physical. Lenny is a little bit like a spy listening to tape recordings of both Ben and Anita's thoughts, playing and rewinding the tapes over and over, torturing himself in preparing their words for the novel he is writing.

Uvi Poznasky is a very talented lady, not only is she a very accomplished writer, she is a poet, sculptor, artist, teacher and much more. The beautiful cover of the book is of one of her works of art and after visiting her website I see that she is indeed gifted and worth taking a look at uviart.com . This is a beautiful and sophisticated novel of love, loss and torture and well worth reading.
Posted by Uvi Poznansky at 5:03 PM