As the Reels Turn

In my story A Heartbeat, Reversed, Edna peers inside a cabinet, and deep down on the bottom shelf she discovers a box. She pulls it out, lifts the flap, and then she can already sense what lies there, covered under the obscure plastic wrap. Perhaps she should avoid unwrapping the thing. It is a silent movie projector, which later in the story allows her to rewind back time.

Now Edna recalled how the very act of projecting had been a special ritual, a special game for her: Watching the reels turn, listening to the sound they produced, gauging the contrast between the blackest black, the whitest white—and above all, playing with different speeds, both forwards and back. It made her marvel at how the brain would merge separate images, to create the illusion of motion.
Giddy with excitement, Edna carried the box to the living room. She used her elbow to clear the coffee table and then, very carefully, set it down. Inside, tucked under the machine, she found two reels: One empty, the other heavy with celluloid. The filmstrip rolled down her fingers. Thrilled at the familiar touch, the touch of perforations, she threaded it as best she could, up and down through several guides, until it locked into place. Then, aiming the projector at the wall, she fired it up.

By the end of the story, something starts happening to her. When her husband Ethan comes back home, we see the scene through his eyes.


He entered the living room and at first glance all he could see, in the ghastly light of the projector, was celluloid; clips and clips of celluloid snaking, curling one over the other, all over the coffee table, all over the floor.
“Edna?” he cried.
He bent over to turn off the machine, and it was there—in the darkest dark, right under that beam of light—that he stumbled over her. He brushed away the celluloid and, guided by nothing more than a sense of touch, passed a hand over her forehead, her eyelid, her ear, trying to piece together how she looked, and what had happened here.
“Wake up, babe,” he whispered.
Her breathing was barely audible. He took a guess—by the grip of her fingers over her nose, and the subtle movement of her cheeks—that she was hiding a smile. Was it a game? Was she toying with him?

It is through his eyes, ears and fingers that we will be led to the final discovery. 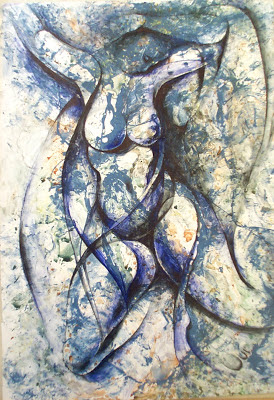 This is my mixed media painting (watercolor, ink, nail-polish drizzles on yupo paper) from around the same time when I wrote this story. I have written before about it in A Heartbeat, Reversed and in Like a Kiss Through a Handkerchief. The story appears in full on the pages of my poetry book, Home.

"the book overflows with some of the most eloquent poetic moments in print"
Posted by Uvi Poznansky at 10:08 AM