The Next Big Thing: I Am What I Am

What is the Next Big Thing? It is a way to 'pass the baton', if you will, between the new writers of today, allowing each one of them in turn to give an insight about her upcoming work, then tag her fellow writers to do the same. This time I was tagged by the inspired poet Bathsheba Daily. So here is a glimpse into my work, just published in Twisted:

What is the working title of your story?


I am thrilled to tell you about my story I Am What I Am. Here is a little secret: this title has a double meaning. Well, what do you expect? I have been accused of having a wickedly twisted mind, just because I enjoy coming up with a good riddle...  So, you may ask, what is the first meaning? And what is the second one?

Wait... Not so fast... I will tell you, but you will have to hold your breath for just a little while...

Where did the idea come from for the story?


This book is a spin on the story of the Book of Job. Job is in the center of a monumental bet between God and Satan. Will he, Job, succumb under pressure and curse heaven? His wife, who like many women in the bible remains nameless, spurs him to put an end to his torture. In my story she also seeks to restore her own life into the pages of history. She is a woman with balls, and for this she is punished, and finds herself in hell.

"Lying still in a corner of the cave, I try my best not to rattle, not to betray my fear. I figure, as long as they think me unconscious, I am safe. I have jolted awake because of the voices, only to discover they are incoherent and muffled. In between the gusts of wind, I can hear them hissing. Each phrase plays out in some verbose foreign music, which I cannot decipher for the life of me. Sigh. This is not Aramaic for sure, or any of the other languages spoken by the locals in my village or by the merchants traveling through along the Jordan river.


It feels as if something has been taken away from me. My breath? My name? Identity? Who am I, then?"

What genre does your story fall under?


For this story, I am at a loss to define it... It is a biblical-hellish genre, spiced with a dash of dark humor, which oddly enough may leave you with an after-taste of philosophical ruminations.

Which actors would you choose to play your characters in a movie rendition?


For the role of Job's wife I would choose Angelina Jolie, and for the role of Satan—Billy Bob Thornton. With this in mind listen to this dialog, described by Job's wife:

He turns a page, which has been earmarked, and from the top he quotes, “Then said his wife unto him, Dost thou still retain thine integrity? Curse God, and die.”


“A clever woman you are! Job should have listened to you.”


“Had he cursed God, I would have won this bet, this maneuver, as you call it,” he says. “Ah, sweet victory! How close it came to be! Too bad he denied you, denied me...”


“Woman, you must have known,” says Satan, pointing at me, at the cavity around my heart, “you were my accomplice!”


“No,” I refuse to agree with him. “I was feeling sorry for Job. My only sin, sir, is impatience. Anything—even death—is better than this hurt, this unrelenting torture. I wanted it to stop. Let it stop, stop already!”

What is the one-sentence synopsis of your story?


Job's wife, known for urging her husband to 'curse God and die' is condemned to a nameless existence in the afterlife, and so she is on a mission to recover her identity; but the price she would have to pay the Prince of Darkness for it may be too heavy for her.

Will your book be self-published or represented by an agency?


My book will be self published.

How long did it take you to write the first draft of your manuscript?


At first I hesitated for several months to step into this universe. But then all hell broke loose, and the characters simply formed in my mind, and demanded to be given a voice. So I ended up letting them out by writing furiously around the clock for a week, and then refining and rewriting for two more weeks.

What other books would you compare this story to within your genre?


I have not read other books in this biblical-hellish genre. I may be delusional, but to me it is the first of its kind...

Who or What inspired you to write this story?


Thinking about the struggle between the light and dark side in our souls, which finds it visual symbol in heaven and hell, directed me towards the bet between God and Satan over the soul of a man. Then Janet Morris, the creator of the Hell series, made a comment to me that 'Job's wife is not important enough for Satan to engage in conversation with her.' I thought, why the hell not?

So the first meaning of I Am What I Am is finding a way to accept her fate, the fate of a nameless woman. The second meaning is a play on the explicit name of God, which in the biblical Hebrew means, I Shall Be What I Shall Be.

What else about your story might pique the reader’s interest?


Alas, the main character is deceased, which turns this into one of the quirkiest stories I have written. As I stepped into her skin, I was reminded of this figure, who sprung out of my head onto a crumpled piece of brown paper, wearing nothing but animal bones to shield herself. It makes for a strange combination of strength and fragility on the outer side, which conceal her inner softness. Here she is, directing a sharp gaze at you: 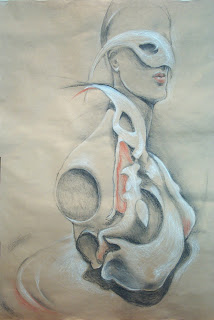 Now it’s my turn to tag people. Please visit their blogs. They will be publishing their answers to the same questions next week.