A Glimpse into Rise to Power

Here is a  glimpse into my novel about the life of David, Rise to Power. In this segment he is old and trembling, and a young woman called Avishag is brought in to keep him warm:

"And her breasts... I have forgotten how juicy and yet how firm they can be on a young body.

Behind us on the wall, centered among the rest of my daggers, knifes and swords, hangs an immensely large blade—but in this blackness I can only imagine it. It is a frightful sight to take in, a sight that can bring some women to their knees. She cannot spot it now, but come morning, she too will be touched.
Moonlight glitters off a fold here, a crease there in the shadowy curtains that hang over our heads. It runs down through the folds, then leaps to her feet, slips over the slope of her hip into the valley, I mean, the valley of her waistline. It is hugging her with a soft touch as if to try, ever o stealthily, to figure out how slender she might be. Then a silvery ray clambers up her shoulder and from there onto the pile of pillows, which is where it halts, it dims out, perhaps to rub out the features of her face. This is just as well.
Who wants to look at her. I do not wish to see myself there, reflected in her eyes. I refuse to learn how much I have shrunk.
Outside, the stars are traveling in measured, imperceptible degrees across the night sky. It is nearly time for them to give up their ghost. I close my eyes, the better to imagine them. And at once I can hear the groans, the tortured groans of my enemies dying at dawn on some faraway battlefield...
Oh Lord! There is nothing sweeter, nothing makes the blood run faster than victory! Oh let me come, let me be reborn, young and carefree and strong once more! Sword in hand, there I would rise again! Again I would rein upon a bloodied, conquered ground...
She holds her breath. Can she guess my thoughts?
In the window facing east, you can now detect a faint impression: a horizon. It has turned a touch rosy. The girl dares not turn away from me—not even to gaze at it, to let it bring back a vision of her father’s place.
In my youth I have seen those tittering cabins, up on the slopes of the Judea mountains. As I fled from my enemies, I hoped to find shelter in one of them, usually in vain. No one would hide a rebel, no one would aid a fugitive... So I can imagine that cabin, that feeling of security within its shaky walls. I can even understand how, until earlier this evening, she has called it home. That place is now obscured not only by the blur, and not only by distance—but also by the tears glazing her eyes.
She is only fourteen years old; yet Joav, my right-hand man, assures me that she knows her duty.
Sometimes I shudder to think how he gains his confidence about such things. On our early adventures I have seen him plunder the countryside and carry away the spoils of war—not before raping women and children. Believe me, I am not as high-minded as you might want me to be, but when it comes to sex, my inclination has always been toward a gentler seduction.
Yet I cannot tell you that I failed to understand him, or his bloody cruelty. I could see how intense his need could be and what it could drive him to do. This awoke in me the darkest, most wickedly delectable thoughts, which I have never committed to paper—until now.
Even without seeing her face, I know her eyes are wide open. It is taking her hours to fall asleep—I can sense how tensely she draws air—because this is our first night, and she knows her duty.
“The sheet,” I say, “look out—”
She gasps, as if to ask, What?
“It’s falling out of place,” I say, hoping she cannot hear the slight tremble in the back of my voice. “Now, tuck it under me. And where’s the other blanket?”
“Are you cold?” she asks, and I can hear a sudden astonishment.
“No,” I lie, and in my mind I cannot help cursing my bad luck with women. If I am hot, they are cold. If I am cold, they are hot!
As if to spite me there is always a battle, not for glory, or for survival or the spoils of war or or some other lofty goal—but rather for control, petty control over the stupid feather-stuffed thing.
“Just, humor me now,” I say. “Pull it over my shoulders. And the other one too. I like the feel of wool. It reminds me of where I came from.”
“Yes,” she whispers. “That I understand.”
“Wool,” I say. “It has the smell of home.”
“Yes,” she says. “It’s the only thing here that does. My God, everything around you is perfumed. Heavily so. At times it makes me wonder what it might smell otherwise.”
I hold myself back from saying, You don’t really want to know. Without these exotic perfumes—which I can afford because her father and other peasants like him have been paying heavy taxes—things in the palace would stink. I mean, really. Of all my senses, smell is the only one that has remained sharp. So without a doubt, this I know: My flesh has begun to rot. Without the delicately calculated mix of my cologne, the scent of my body would gnaw at you.
She pulls the woolen cover over my ears, on top of a pile of other layers. Then, lowering her eyes with what seems like a childish shyness, she draws closer and wraps her arms around me.
I have no doubt she is a virgin. Joav is quite particular when it comes to choosing merchandise, for himself or for me. But at this moment, one thing becomes clear to me: innocent she is not.
Which arouses in me a sudden, inexplicable disdain, even anger for her. How can a man pursue a woman, when she is this obedient?
She knows her duty all too well." 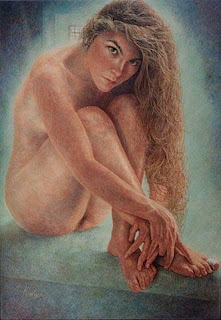 This painting, titled Double-Crossed, sparked an immediate connection in my mind to this story. It is by Klarissa Kocsis, an artist friend whom I met on Facebook.

“What a treat to have the story of David presented in such a stimulating manner”
Posted by Uvi Poznansky at 6:38 PM