Christoph Fischer is a high-ranking reviewer on Goodreads and Amazon. Just as importantly he is the author of two historical fiction books, Sebastian and The Luck of the Weissensteiners. I am greatly honored that he posted this wonderful ★★★★★ review for my book, Twisted: 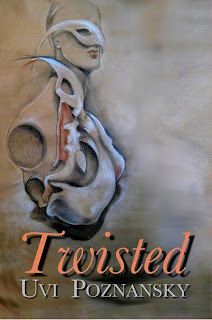 "Twisted" by Uvi Poznansky has been on my reading list for some time. After having read and adored "Home" and "A Favourite Son" I decided to save this expected treasure for a special occasion but I only lasted a week.
The book is nothing short of amazing. It is a fantastic selection of four short stories, all slightly dark and - as the title promises - with their own kind of twist.
My favourite story is the first, a tale about Job's wife that is based on a very imaginative and simply terrific idea. Job's wife, who in the biblical story told her husband to curse God, who is trying Job's faith with all sorts of misfortune, faces the consequences of her dis-loyal action. God and Satan's bet about Job's loyalty is one of the key stories in the bible in my view in that it asks believers to have blind faith. Job's wife just had about enough after plagues and death and what not and represents one of the most challenging and controversial figures in the Bible. Told in her own voice this is a rather fascinating and intriguing story that almost ended too soon for my liking and addictive personality.
The second short story reads like a take on creationism by giving a voice to a clay figure who observes her creator. With the mentioning of Adam in this story the Biblical reference is implied albeit less specific, yet challenging one's perspective of the Eden story.
Freedom, identity and fate are some of the themes running through the stories.
This is an amazing and exciting read, one that is playful as it is intellectually stimulating and founded in sharp observation. The characters created are certainly quite a long way from the norm and a firework of originality.
Adding unusual elements, such as the mention of a lift and the King David Hotel in a biblical story, using the perspective of a cat and of a clay figure, these pieces take the reader deliberately out of their comfort zone and out of their experience into their head, only to draw them back into the story and the reality the characters are experiencing.
A great book, not easily forgotten.

Posted by Uvi Poznansky at 9:31 AM