Here is a lovely review for the audiobook edition of Apart From Love:

A famous poet, translator, and philosopher Samuil Marshak once said that frequent use of highly emotional words robs them of their meaning, making them dull and lackluster, like an old coin losing its shine. And that's exactly what Anita, the young wife of Ben's aging father, says to her husband in the story: “Just say something to me. Anything." And I thought, Any other word apart from Love, `cause that word is diluted, and no one knows what it really means, anyway.

Coming from uneducated Anita, who is a far cry from being a poet or a philosopher, this thought acquires an even more poignant and raw meaning. She is not trying to impress anyone, she is speaking her heart and her mind, trying to cope with the turmoil of her aging husband's fast decline and her growing attraction for his adult son Ben.

Emotions run high in this story by Uvi Poznansky, made even more prominent by the alternating voices in the audio version. Heather Jane Hogan is wonderful as Anita: she comes across as open and unpretentious, just like Anita’s character is supposed to be. David Kudler, as Ben, is more eloquent and sophisticated not only in his words but in his tone of voice that comes across in the audiobook. I sensed a tone of subtle surprise in his tone as he finds himself falling for Anita, through guilt and internal struggle. 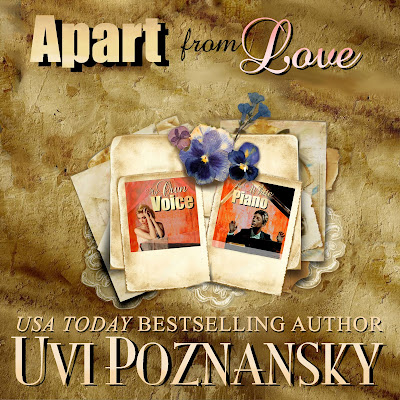 Posted by Uvi Poznansky at 4:06 PM