In a moment he would reach for her hand, smiling as if nothing bad could happen

And over that threshold down there, she could somehow read the shape of the shadow. How it appeared suddenly, spilling out of nowhere, was quite beyond her, but she could tell, couldn’t she, that there was no floor.
This time, perhaps because of starting to fall asleep, her diary seemed heavier than usual. Getting up, she brushed her fingers over it and could feel the raised spine, and rough spots where the gold lettering spelling ‘Love’ had peeled off.
If she were to take it with her, the book might slip. It might drop from her hands. It might then continue dropping, farther and farther away from view through the empty elevator shaft, releasing letter after letter into the air, filling its darkness with white feathery pages, rustling, whispering what she had written such a long time ago, what had been clamped—until now—between the front and back covers, as if it were a flower meant for drying.
Her longing for him.
She wiped her face, and now her sight cleared. With every step toward that door, she could see his eyes shining brighter and brighter across from her, as if David—yes, as if he were right there, hanging in midair, framed by the hollow. By what twist of imagination did this happen? How did this outline of his jaw suddenly appear, how did it open now, as if he was just about to call her name?
In a moment, she thought, he would reach for her hand, smiling as if nothing bad could happen— 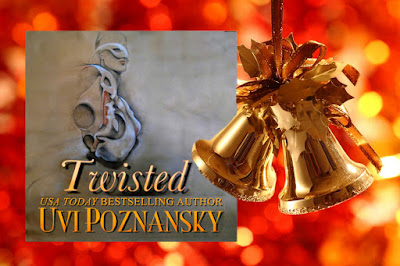 ★ Love Horror? Treat yourself to a thrill ★

"A collection of four stories, each one an interesting tale of mystery and intrigue"
-Dennis Waller, Top 500 Reviewer
Posted by Uvi Poznansky at 8:44 PM