A portrait of our love, rippling there, across the surface of the wine 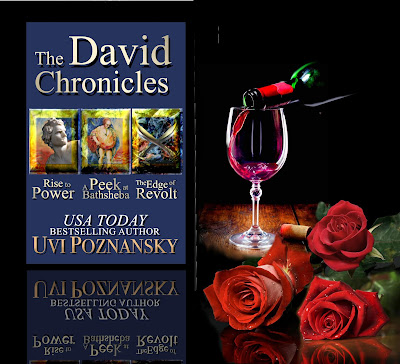 David is a character that has been fascinating me all my life. My new trilogy, The David Chronicles, is in his voice. It is the story of David as you have never heard it before: from the king himself, telling the unofficial version, the one he never allowed his court scribes to recount. In his mind, history is written to praise the victorious—but at the last stretch of his illustrious life, he feels an irresistible urge to tell the truth. In the first volume, Rise to Power, David gives you a fascinating account of his early years, culminating with a tribal coronation. Rooted in ancient lore, his is a surprisingly modern memoir.

Readers often ask me, "Were you quoting the bible or paraphrasing? Since I was looking at the King James version, and I'm certain you weren't, I really didn't expect a word for word; nevertheless, sometimes I did." To which I say, all the English versions, King James included, are translations and therefore, they are interpretations of the original Hebrew, in which I am versed to the point of knowing it by heart. In this trilogy, the choice of modern language is by design. It is meant to indicate to the reader that this story is no fairytale, it is happening here and now. Step into the skin of David, and look yourself in the mirror.

The entire book is greatly informed by art through the ages, including modern art about David. Here is but one example:


I try to take control of my desire by playing my lyre and writing poetry, but notes and words fail me. Everything I compose these days seems to be but a pale shadow of a shadow of what Bathsheba means to me.
And the one image that keeps coming back to me is our reflection in the glass, where our faces melded into one. My eye, her eye, and around us, the outline of a new, fluid identity. A portrait of our love, rippling there, across the surface of the wine.
This was inspired by this painting of David and Bathsheba, by Chagall. In my future posts I will give you many other art pieces, modern and old, that informed my story. 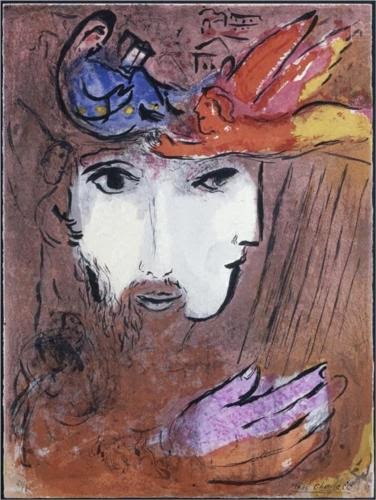 Volume I: Rise to Power

This volume starts at his coming to Saul's court, to play before king Saul, and ends with his coronation to become king of a single tribe. How does David see himself, during this first phase of his life? With his hands stained with blood, can he find an inner balance between conflicting drives: his ambition for the crown, his determination to survive the conflict with Saul, and his longing for purity, for a touch of the divine, as expressed so lyrically in his psalms and music?

In an era of cruelty, when destroying the enemy is deemed a sacred directive, the slayer of Goliath finds a way to become larger than life. His search for a path to power leads him in ways that are, at times, scandalous. Notorious for his contradictions, David is seen by others as a gifted court entertainer, a successful captain in Saul’s army, a cunning fugitive, a traitor leading a gang of felons, and a ruthless raider of neighboring towns who leaves no witnesses behind.

Volume II: A Peek at Bathsheba

This volume starts at the civil war between the tribes, his eventual coronation over the whole nation of Israel, and his affair with Bathsheba. Against the backdrop of wars, raging within the land and without, David is growing into the mantle of leadership. Between his anointment as a tribal king and his anointment as the king of all of Israel, he uses wisdom, cunning, and his own understanding of the forces of history, aiming for high ideals: stopping the bloodshed, uniting the nation, and bringing about healing and peace.

But then, having reached his peak, David falters. He makes a serious error that threatens to undo his political success, and cost him not only the adoration of his people—but also the sense of being sustained by a divine power. That error is the most torrid tale of passion ever told: his deliciously forbidden love for Bathsheba, followed by his attempt to cover up the ensuing scandal by sending her husband—who serves him faithfully in his army—to his death.
Volume III: The Edge of Revolt

Struggling to find the right balance between loving his sons and upholding justice, David is silent when Amnon rapes his daughter, Tamar, and when Absalom lures Amnon to his death. These crimes go punished, because a mysterious change has come upon the king, which his court scribes note even before he does. In the past he had to explain his actions, such as the affair with Bathsheba, to them. Now, they want to understand the opposite thing: his lack of action.
In families other than his, such matters may be a mere matter of gossip. Yet when assault, incest, and murder occur in the king’s family, they affect matters of the state. David is toppled from his throne and must escape from the son he adores, Absalom.
Even as he finds a way to quell the revolt and come back to the City of David, the road ahead seems unclear. How will he find the right successor amongst his remaining sons, the one who will connect to him and continue his legacy?


This is volume III of the trilogy The David Chronicles, told candidly by the king himself. David uses modern language, indicating that this is no fairytale. Rather, it is a story that is happening here and now.
Here is David, extending his invitation to you, in the prologue of Rise to Power:

The tip of my pen is dull, and the ink has dried, but that cannot stop me from writing. Nothing will. I am grasping for power once again, but in a different way than I did back then. This time I can see, with great clarity, that power does not come from the crown.
At long last I have no urge anymore to keep my grasp on it. Now I know, power comes from within, from something else entirely: my skill with words. I wish I would have recognized it a long time ago, on my first visit to the royal court. Perhaps then I would have become a poet. Not a King.
It is still a long time from daybreak, and the girl’s breast heaves as she mumbles something, some unclear word. She is so close at hand and yet, so far out of my reach.
When I was first crowned, I was such a vigorous young man that no illness could keep me away from my dear wives and concubines. If I would catch a cold, all of them would be sneezing. I know, somehow, that unlike all the women I have had, Abishag is the one I will never know.
I hold my breath until she lulls herself back to sleep. Faint shadows start dancing on the wall. I read the shapes, trying to invent someone, a listener. You.
I whisper, Come in... Call me insane, who cares? Who the hell cares if you refuse to trust me, if you insist on clinging to your kind of reality, which is as dull as it is solid... Mine, I insist, is not a dream. But even if it is... Even so, it is true! How can you deny it? Here is my story. I am opening it up to you.
I can see why at first glance what you see here—these records which I jotted here, on these papyrus rolls—may seem scattered, even scary. I understand why you step back from my door, why look over your shoulder to find the guard...
Come in! Will you? Will you read these scribblings? Can you see my sword, which I have drawn here, look! Can you see it the way I do, lifting out of the ink and into the air, turning magically over, around and around, right in the center of the space? If you can, then—by the flash of it—I shall take you along, to leap with me into the surface of the steely thing. Into my reflection.
★ Love historical fiction? Treat yourself to a gift ★
Historical Fiction with a Modern Twist...
The trilogy:
The David Chronicles

Posted by Uvi Poznansky at 8:18 AM