There I was, held by a spell

“This place is amazing,” said a soft, sultry voice in a slight Russian accent. “It’s abuzz with excitement!”
I looked up. A young woman swung around in my direction, wearing full-length satin gloves that extended up above the elbows, a sparkly black evening dress with a slit on the side, and a necklace that dipped into her cleavage. Her hair swayed around her, shiny and bleached blond, as she gave a little nod to me. With a little sigh, she lowered herself into the empty seat.
“No, this must be a mistake,” I said.
“What is?”
“This seat is taken.”
“Is it?”
“It is.”
She checked her ticket. “Oh yes, you’re right. My seat is on the other side of you.”
She stepped around my knees on her way to that seat. I looked the other way, but felt her staring at me.
“You look familiar,” she said.
I shrugged, not knowing how to respond, or if this was some ploy to draw my attention to her. Meanwhile, someone in the row behind us tapped her shoulder, trying to hint that she should stop it, and no more chitchat, because the sounds of musicians tuning their instruments was already heard behind the scenes.
She licked her red lips and offered a gloved hand in a gesture that confused me. What are the proper manners here? Should I shake it or kiss it?
“My name,” she said, “is Lana.”
“Lenny,” said I.
“Oh!” She touched a gloved finger to her forehead, and a sudden glint of recognition shot from the corner of her eye. “What a surprise! What a small world! Now I know who you are!”
“You do?”
“You’re a marine, aren’t you?”
“I am—”
“You’re Ryan’s friend, right?”
“You know Ryan?”
“I do! I’m his girlfriend, you must have heard about me, no? Anyway I got a letter from him, just the other day, with picture of both of you, looking so, so striking in uniform. You were standing there with those English girls all around you, in front of the embassy in London. Don’t tell him I said this,” she hissed in my ear, “because if you do I’ll deny it, but you’re even more handsome in person, especially in this fine suit, if you don’t mind me saying so—”
“But I do!” said the man from behind.
And another one said, “Shush!”
She shrugged him off with a pretty smile, confident that no one can resist her charms, but she did lower her voice, just a bit.
“Talk about a coincidence,” she said, crossing her legs and shifting position to cuddle up to me, as if she were my babe.
I left her question unanswered, because the house lights started dimming. To the sound of applause, which mixed with the sound of wind instruments from the orchestra pit, an announcer stepped out from behind the curtain and headed to the front edge of the stage.
Meanwhile, “Why are you here?” Lana went on to ask. “Is everyone coming home? I mean, has the war ended?”
There was a gasp from behind.
I said nothing to her, because nothing is something at which I am the best at saying, and because this was not the time to say a thing, especially not to someone who was so oblivious to what was going on in the world.
It maddened me to think that my friends were risking life and limb on the other side of the Atlantic Ocean and that civilian casualties were mounting all over Europe, only to be utterly ignored by the likes of this woman, whose only thought was finding someone, anyone to amuse her.
By now, the announcer came to a stand directly in front of us. “Tonight,” he said, “we’re proud to present a brilliant pianist whose lyrical sensitivity has been honed by acclaimed performances, in every concert hall all over the country, from Los Angeles to Boston.”
I felt ignorant for not checking the program ahead of time, because of doubting that I would find myself in this place. I had no idea of what music to expect, nor did I know the names of the performers. Now my heart quickened with a sense of anticipation, which was as remarkable as the boredom that registered on Lana’s face. I was surprised to see her subduing a yawn.
Meanwhile, the announcer went on. “If you haven’t heard the name up to now,” he said, “you’ve been missing out. Quite simply, this performer is known for an amazing virtuosity. One thing I can promise you: after tonight, you’ll never forget her!”
Then he stepped back and cast a glance over his shoulder. With ghosts of light fluttering around its circle, the spotlight followed him, widening its focus as it went, until reaching the outline, the curvy outline of a grand piano. It washed the heavy, carved legs with light, then climbed over the Steinway and brought a figure standing by its side out of the shadows.
And there, against the background of richly decorated panels around the stage, in a long, shimmering evening gown that seemed to be aglow, was the one who had vanished, mysteriously, from my life. I looked at her bright, green eyes and for just a moment thought I felt her looking back at me.
No, I said to myself. From up there, she couldn’t have spotted me. To her I am part of a crowd, a dark, anonymous mass with a glint here, a glint there, flashing across the glass of a pair of binoculars, aimed at her from this and that direction.
It was at that moment that by the pang, the sharp pang in my heart, I knew: love was not something I could decide not to do.
There I was, held by a spell.
Natasha. 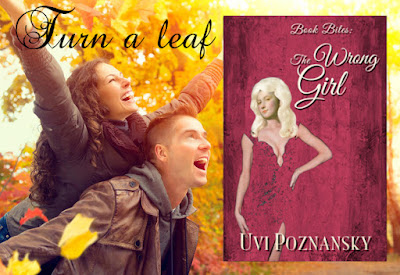 The Wrong Girl offers samples from books in the Still Life with Memories series. These samples give a taste not of Natasha (the girl Lenny loves) but rather of another woman, Lana, who appears time and again, in several scenes in the books. She is flirtatious enough to stir suspicion, upsetting the course of his life time and again.
I hope you will find these samples not only delicious but also arousing an irresistible craving for more.

So, you ask, what is this series all about?
For a long time I had this idea of creating a series around the events in the life of a unique family. The characters had to have not only a compelling voice, but they had to see things in an entirely different light, which would create contrasts and conflicts, as each one of them comes from a different background and has different passions, needs, and aspirations.

The complete series
Still Life with Memories
Volume I:

Posted by Uvi Poznansky at 2:51 PM