I will have him

When I was sure I was presentable, I left our room, locking the door behind me, and walked around to the front of the building. I’d forgotten to get my wages from Imelda and did not want to disappoint my mother by coming home empty-handed.
I saw no need to knock, so I walked inside. It was very quiet and I assumed that Imelda was in one of the back rooms, her workday over. I longed to get home – to do my chores alone and think about what had happened between Micah and me that afternoon.
Not wanting to disturb or frighten the missus, I walked quietly into the room. I started toward the back when I heard someone yelling.
“I’ll have what is mine!”
It was the old man and there was anger in his voice. I froze.
“You cannot have him” Imelda screamed. “I have told you this. Without the boy, there is no girl, and I have invested much too much time to let that go easily. No, old man. You must find another or wait for the next cycle.”
Confused and a little frightened, I took a step forward and now could see them. The old man was halfway out of his chair, the cane he always carried, but never used, pointed at Imelda. His face was full of malice and I cowered in fear just from beholding it.
But that was not the end of it. Imelda stood but five feet away – her arms outstretched, fingers bent in impossible directions, as if her bones had melted and reformed in some strange, inhuman way. Her face, like that of the old man, was set – anger flashed in her eyes.
“I will have him,” the old man reiterated, his cane now undulating as if it were a serpent come to life.
Terrified, I took a step backward and, in error, knocked something from one of the shelves to the floor. It landed with a thud so loud I thought my eardrums would burst.
Both Imelda and the old man turned to stare at me. My heart pounded.
Imelda waved her misshapen hands and, suddenly, it seemed as if all the air had been sucked out of the room. My head grew heavy as everything around me lost shape, blurring as if in a heavy rainfall or fog. Bile rose in my throat as my knees grew weak and I found myself kneeling on the floor, my head in my hands.

Excerpt from The Turning
By Linda Watkins 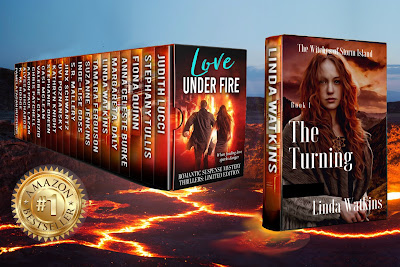 ★ Love Romantic Suspense? ★
Get these 21 brand new novels, never before published, in one boxed set!
#1 Bestseller
No longer available

Posted by Uvi Poznansky at 7:22 PM