Quick, let’s put her out of her misery

Here is an art piece I have been working on for the last couple of weeks. It started as a watercolor and went wild from there. I think of the area at the left edge of the paper as an organic extension of the painting, even though it is not painted. This part grew into shape by cutting out the paper to create a lace-like design.

One of the ideas that ran through my mind was focusing on an ear (can you find it here?) because the sense of hearing is what I focus on in my new novel, Coma Confidential. Since my protagonist is in coma, she can perceive what is going on around her only through two senses: smell and hearing. This imposes a unique discipline on me, to avoid describing any visual input in her condition, unless it is a memory that dawns on her, or else a morphine-induced hallucination.

And, there is also another challenge. How do you develop a story, and keep the action going, as well as the tension, when the protagonist is utterly passive, because of a violent incident in her recent past, which she is yet to recall?

Here is an excerpt, written in Ashley's voice:

Betty isn’t supposed to be here at this time of night, well past visiting hours. But there, there is her voice, whispering to someone out in the corridor, “So? What you waiting for?”
For a bit, I hesitate to believe my ears. But just in case she’s real, I shut my eyelids and freeze. The last part doesn’t take much effort.
Her perfume, heavy as it is, carries over the threshold. Oh yes, now I’m convinced. It’s real all right! As I recall, Betty was arrested not too long ago for shoplifting at Macy’s. When it comes to stealing, she has a decidedly expensive taste: Chanel’s Coco Mademoiselle Eau de Parfum, no less.
Rumors have it that because this was a repeated offense, she was not only given a heavy fine but also thrown in jail, only to be bailed out a day later by some rich old uncle. The rich part I believe, not so much the old uncle part, because besides hanging out with petty criminals, Betty has a habit of attracting men well past their prime who are anything but family.
“Well?” she repeats, in her sexiest alto voice. “We must be quick.”
“Oh, I do not know,” says a male voice, thickly laden with hesitation.
I think I’ve heard him before, during the change of guards outside my room. He drags his vowels slowly, in what sounds like a Russian accent.
Betty is impatient with him. “You don’t know? What is there to know? Let’s just finish her off.”
At that, I shudder. Luckily, this is evident only around the tip of my pinky toe.
“Vell,” he says. “Sure, I have to clean up the mess I left with this girl. But you, vat do you have against her?”
“I hate her,” says Betty. “She has that smirk on her face—even now, see?—like she’s so much better, so much smarter than me.”
“Vat are you talking about?” he asks. “This girl, she can not smirk, can not even breathe—”
“Then, let’s put her out of her misery.” 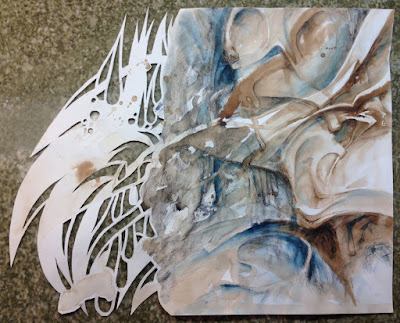 Cutout of a watercolor and charcoal painting.

Coma Confidential
(Volume I of Ash Suspense Thrillers with a Dash of Romance)
Paperback: Amazon
Posted by Uvi Poznansky at 10:04 PM