This crime may be my responsibility

While I was writing Virtually Lace from the point of view of my protagonist, Michael, I became engaged with his girlfriend, Ash, who helps him solve a murder mystery. As soon as the book was published, Ash took over and started telling me an earlier chapter of her life, when she was in coma, listening to her visitors in the ER. One of them is Michael. Is he connected, in some way, to the crime that put her in the hospital?


The air between us seems to warm up as he draws closer. Boy, am I glad that earlier this morning, the nurse removed my nasal mask. It’s a small improvement, but an important one, in more ways than one: first, I have no need for a medical ventilator to push air mechanically into my lungs. Second, I can catch his smell. And third, I look a bit more presentable. Or so I hope.
Without the benefit of a lipstick, it’s too late to consider any style other than au naturel. Part of me hates being vain. The other part knows—even without a mirror—that with all the bruises, which make my face tender, this is not my preferred look.
Hovering just over my chest, Michael gasps.
If only I could wrap my arms around him. If only I could give him some comfort.
He touches the bandages around my chin, my temple, and murmurs to me, “Are you there, sweetheart?”
Short of answering, how can I respond? Any movement—small as it may be—would be a victory, a meaningful victory over this state of paralysis.
First, I try to expand my ribcage, hoping that he may feel it against his cheek. Breathe, I tell myself. Breathe deep.
Nothing.
Next, I try to rub elbows with him. I mean, really. When that doesn’t work, I try to move my wrist, my thumb, the tip of my forefinger.
Nothing.
At last, I try to flutter my eyelashes.
Nothing. All in vain.
By the change in pressure at the side of my mattress, I feel him lifting away his elbows. His hair whooshes over me. He must be shaking his head.
“Oh, Ash,” he says, before his voice dies down into despair.
A tear wells up at the corner of my eye. I think it escaped his attention. Perhaps he’s burying his face in his hands.
Yes, his voice is muffled. “Maybe it’s best that you’re asleep,” he says. “Clearly, this is not the right time to bother you with my problems.”
Problems? What problems?
He groans. “It’s hard, being accused of a crime. You, of all people, know I didn’t do it. Or maybe I’m mistaken. Maybe even you can’t be sure.”
I consider shrugging, but before I can find a moment to work on that, Michael adds something that is nothing short of strange.
“In a sense,” he says, “this crime may be my responsibility.”
I’m about to scream, “Say what?”
“I think I could have prevented it.” 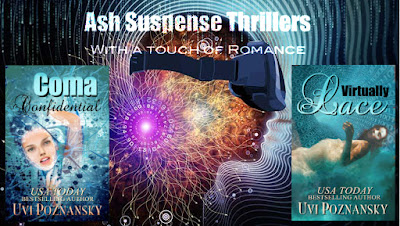 Posted by Uvi Poznansky at 7:29 PM