Why, then, should he find himself feeling awkward, as if he were an intruder?

He strapped on the headset that Ash had designed for him. In the virtual reality industry, headsets were as bulky as a helmet. By contrast, this one was made of some thin film, which made it feel like it wasn’t there, even though it included all the necessary equipment: built-in motion sensors and an external camera tracker, which drastically improved image fidelity, as well as head tracking. Before you knew it, soft lenses would swing around your left and right temples and with a digital click, come directly into contact with the eyes.

At this point, Michael had dual vision. In one layer, he saw the constructed scene; in another—his office, lit by a fluorescent lamp that was strobing overhead. He switched it off and in a heartbeat, the room drowned in darkness.

Now he could focus much better. Something about the scene made it look wrong. By default, an imaginary light source was established at the center of it, shedding light vectors at an arbitrary angle of eighty degrees overhead, to simulate daylight. It intensified the horizontal surfaces by making them bright. At the same time, it washed the vertical ones with stark shadows. When compared with his memory, the result appeared remarkably contrived.

Despite wanting to forget everything about last night, the lamppost at that street corner became clear in his mind. Slowly, stealthily, its shadow had started prowling to the other side...

This simulated view had to be corrected. The fastest way to do it was for him to access the code via its voice recognition and comprehension interface.

Around him, shadows started swinging as the sun angled its way to the west. When finally it sank, the horizon glowed in red.

What was that noise?

In a layer behind the sunset, his office door was open just a crack—exactly as he had left it. The walls were as shady as ever. Nothing stirred. Standing there perfectly still, only he could hear the wind. Only he could spot the trail, twisting and turning at the top of the rugged cliffs across his office floor, between one stack of software specifications and another. Why, then, should he find himself feeling awkward, as if he were an intruder in his own office?

There was no way to control the mad throb of his blood, to force it back into a regulated pace. Michael took off the headset. With the sound of a puff, Laguna Beach vanished from view—only to reveal a reflection, someone’s reflection flashing across his computer screen.

By the subtle hint of perfume, he knew who she was even before turning around to look at her. Every muscle in him ached for her touch. He wanted so badly to wrap his arms around her waist and gather her, at long last, to his breast. But his heart told him she would resist. 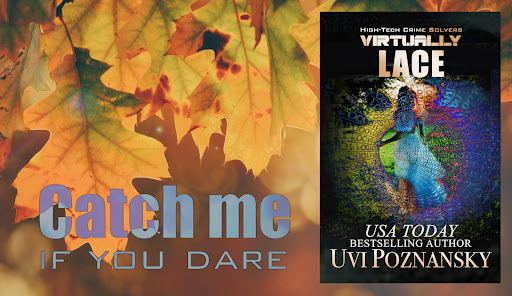 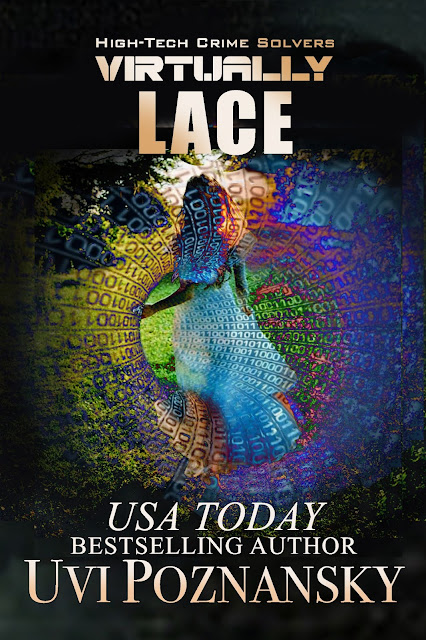 Astonishingly well written, Uvi once again surprises us with the depth of her talent. This is one fine series to follow. Highly recommended.

Posted by Uvi Poznansky at 5:47 PM