By that sound I knew what it was: The barrel of a gun

I used to think that ‘throwing caution to the wind’ was an overblown expression—until I found myself doing just that. I hurried in the direction of the glow and then, upon arriving at the village square, found the sight of the fire to be nothing short of hypnotizing. So did a crowd of Frenchmen.
There was not a young man among them in sight. Most of them seemed to be in their fifties and sixties. Their faces reddened by blows of heat, there they stood, watching the flames engulf a building with a frightening roar.
There was a bursting of timber as the door collapsed into the blaze, its mass reduced to embers. Hot air rippled, one sheet over another, over the equipment inside, which included telegraph and encoding machines, as well as a large printing press. First, its metal turned white-hot. Then it started melting in a tortuous twist, as if trying to release flaming letters.
Stacks of typed leaflets were arranged in one corner of the space; stacks of newspaper in the other. Over them, flying cinders swirled in the air, sparking fire.
And in a flash, it all crumpled into ashes.
“There goes Le Populaire,” said one man, with a sigh.
And another echoed, “Oui, there it goes.”
“One more underground newspaper, destroyed.”
“The mere existence of it used to show us dissenters that we are not alone.”
“Now, alone we are.”
I stood in the back, wondering why none of them made a move, no one carried buckets of water to douse the flames. I mean, with Paris newspapers under tight German supervision, why not try to save this place? Why not help the French Resistance get their word out? Should there not be an alternative to controlled press? Were these villagers immobilized by shock—or else, was there some other explanation, which I failed to grasp, for being so passive?
The sun had not risen yet, but every facade around the square was brightly lit. It was in that glow that I noticed something, a curious image that drew me away from the crowd, toward the opposite side.
Pasted across the wall was a Nazi propaganda poster. At the top, in large capital letters, was a one-word question directed at the French people: Liberateurs? Are you foolish enough to consider these criminals, these members of the L'Armée du crime who are wanted dead or alive, your liberators? Take note, a reward is offered for their capture!
There they were, displayed under that title for all to see: five coarse, black-and-white photographs, under which were five names of Resistance fighters. The picture in the center was the one to which I was drawn. It gave me a pang of distress. Amazingly this young, pale woman with a defiant gaze in her eyes looked a lot like Natasha—but no, that could not be!
My vision must have deceived me, perhaps because of the shadows dancing across the poster, or the flames behind me, or the smoke, or something. After all, my sweetheart was elsewhere. She was far, far away.
The only thing that I found more surprising than this remarkable resemblance was this: the label under her picture.
It said, Rochelle.
In confusion I shook my head, or rather, tried to do so—only to sense that something, some hard thing, was blocking me.
It pressed directly against my temple. I heard the sound of a hammer being cocked, being pulled back into position so it might strike when released by the trigger. By that sound I knew what it was:
The barrel of a gun. 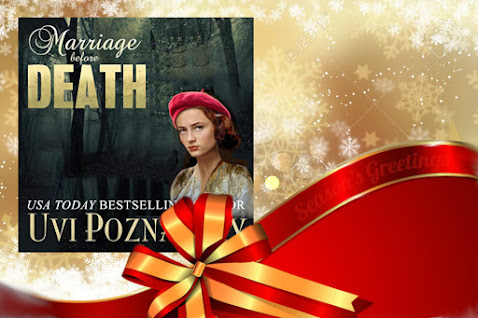 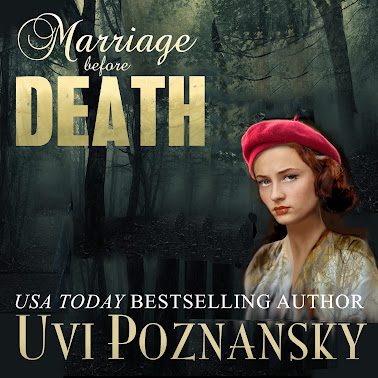 "Uvi Poznansky raises the stakes in a high stakes story, filled with uncertainty, drama and suspense... This book is a nail biter and one I found hard to put down. For me, this is Uvi Poznansky's best novel to date."
- Richard Weatherly, Author
Posted by Uvi Poznansky at 8:53 PM