There she was, her beautiful head crowned with algae, her delicate throat cut, oozing blood.

Common wisdom suggests that the killer always comes back to the murder scene, because of an urge to relive the thrill—morbid as it might be—of taking a life. Michael felt a similar urge, but he told himself it was for purely analytical reasons, so he might study every detail and plug it into his computer simulation, in search for clues.

His cellphone and the attached miniature omnidirectional camera had sunk in the waves at the murder scene. At this point, he assumed they were lost to him. But he was determined to recover something else left behind: his shoes. His good pair of shoes, to be exact. How could he have forgotten all about them, until now? Last night he had tossed them away, so as to move barefoot over the pebbles and into the shallow water, where the body lay atop the rocks.

Because of the shock, he had only a vague memory of his way up the trail back to his car. Now, the last thing he needed was for those shoes to fall into the cops’ hands, to be examined for traces of his DNA.

He could just imagine them—the shoes, not the cops—wrapped in two little plastic bags, one marked ‘exhibit F’ and the other ‘exhibit G.’ Finding them in time was a pressing task. It was time to go back to Laguna Beach.

By noontime, the veil of morning fog lay in shreds. Out of it emerged gray cliffs. The ocean sprawled at their feet in endless recoil. One breaker after another turned upon itself and, reduced to shallow silence, rolled its froth backwards from the shore. A flock of gulls camped on top of the rock formation. They seemed to be contemplating the scene with a patient indifference.

Michael took out the seashell he had bought from the little girl last night and lifted it to his ear. What was that sound, inside? A hiss? No, it was the faint wheeze of the surge. It emanated from the inner passage of the shell, and along with a pungent scent of seaweed and decay, brought back the memory of the body. There she was, her beautiful head crowned with algae, her delicate throat cut, oozing blood. 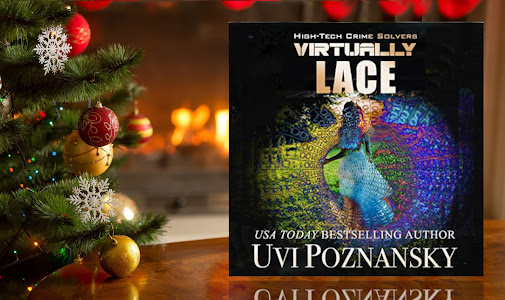 I felt as though I was in Michael's work environment whenever he was using Virtual Reality. Whether he was displaying Laguna Beach or the Northrop Grumman B -21 Raiders flying overhead, I not only was there but I could feel my heart pounding and my pulse racing...
~Serenity, HALL OF FAME,  TOP 10 REVIEWER
Posted by Uvi Poznansky at 1:14 PM