Envy is the least of her problems, especially when compared to being dead


The last thing I need is to establish a connection with a jealous wife. Actually, envy is the least of her problems, especially when compared to being dead.

“Sorry,” I say. “I’m curious to learn more about Dr. Patel, especially about his professional life. Don’t ask me why. I have my reasons. But his wife? I want nothing whatsoever to do her!”

I insist, “What’s between them is not really my business.”

I’m at loss for a good comeback.

Meanwhile, the waitress pulls something out of her pocket. It slips down her windbreaker and over her drenched apron. She bends over, snatches it off the ground, and raises it to me over the edge of the cracked-open window.

Then, with a trembling lip, she says, “It’s yours now! I want nothing to do with all this trouble.”

I shake my head. “Keep it. Trouble is not what I need in my life, either.”

“Please,” says the waitress. Her voice is inundated with fear, which makes a shiver go down through me. “Take it!”

Is she out of her mind? Who is she to order me around? I have Ma for that!

I give a subtle hint to the driver to get us out of here and start closing my window, so as to block this woman out. “No, thank you,” I say. “You hold on to it, whatever it is.”

The waitress clutches the edge of the window so hard that her nails—chipped and painted red—nearly scratch through it.

Just then comes the second flash of light. It outlines her shoulders, fizzes around her hair like a fiery halo as she stumbles forward towards me. This time, lightening is clearly what it’s not.

She’s been shot at, she’s been hit.

Her fingers loosen, letting something drop inside, some small object that misses my lap, rolls over, and lands somewhere underneath me on the car floor.

Meanwhile her eye bulges over. It turns, turns, turns in its socket, until its iris seems to roll back around and over the eyeball, until her chest slips down along the sudden spill of blood upon the glass, until the terror finally lets go of her, leaving her wrung out by the wayside like an old dishrag.

In the back window, she looks like a mound of tatters crumpling into the night as the car jerks into motion. It maneuvers wildly left and right as we make our escape. 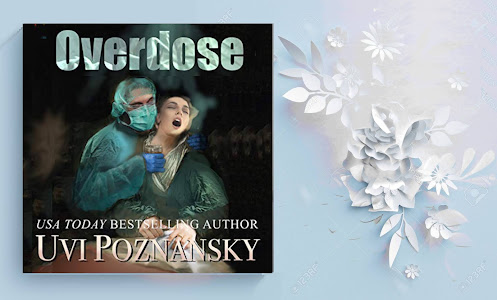 Months after recovering from coma, Ash discovers that the man who performed her brain surgery has a questionable medical experience and a dark past. Should she expose him, at the risk of becoming vulnerable to his revenge?

"Heather Jane Hogan delivers depth and surprise to this already thrilling story. What a delight to hear her tell the story of Ash, who’s been out of her coma for a few months when headaches and dizziness require her to pay another visit to her brain surgeon, a mysterious man named Dr. Patel... This marvelous tale is brought wonderfully to life by Ms. Hogan, who delivers the final, terrific twist with a bang. Highly recommended, five stars!"

Posted by Uvi Poznansky at 4:30 PM