My good friend, prolific author Allen Kent, asked me three questions that made me think about the writing of my thriller, Overkill.

Your writing style in the Ash Suspense Thrillers with a Dash of Romance took a new turn, compared to your other two series Still Life with Memories and The David Chronicles. Can you tell us in what ways you changed it?

My writing style consists of paragraphs that end on a high note. A punch, if you will. When a paragraph reaches a point of remarkable emotion, that’s where I end it, so the impact will linger. Also in this series, I re-discovered the power of short sentences that pack a punch. They stand in contrast to the rest of the sentences and, in a word, give you the essence of the character’s emotions.

Along the same lines, I give special attention to the last paragraph in a chapter, and in the case of The Ash Chronicles I cut the chapter on  a cliff hanger that propels you to the next chapter.

This is true of the end of the first chapter in Overkill:

Perhaps I’m on edge for no reason. Perhaps I’m too sensitive. But how can I quell this anxiety, how can I prevent my nerves from consuming me, when the assault I suffered in the past taught me that the only thing I can trust is my instinct?

Sometimes, even that can fail me.

Who can I call, who can pick me up in a hurry? Anyone would do—except for Ma. I don’t have the inclination to tell her what is starting to become clear.

I have a stalker.

Ed steps outside, walks around the Ford, and—acting now like a perfect gentleman—holds the back door open for his son.

Timmy slips out with a sigh of relief and then, instead of marching off to class, he starts chasing a monarch butterfly with vivid orange and black markings that comes flitting, ever so dreamily, just past his nose.

I can’t blame Timmy. In his place I may well do the same. But my job is to make sure he is where he needs to be.

“Which way to your class?” I ask, and—before the sound of gunshots drowns my voice, before screams start to rise, before people around us fall to the ground crawling for cover—a huge air wave from a supersonic round slaps me in the face.

One bullet ricochets off the car, It scratches across the front window, making a glass fragment fly into my arm, stinging the flesh with a burning sensation.

The other bullet hits Ed in the chest.

What was the most challenging thing in writing your thriller, Overkill?

The most challenging thing is to understand the mind of the killer, his motives, what pushes him to the point of no return. This is especially hard in this book, because of the age of the killer. He’s a teenager, which in general makes me think of ‘sweet sixteen’ — so it was especially tricky to step into his shoes. But this is exactly what drew me to this story: how does a boy come to become a mass murderer?

This story is dedicated to victims of mass shootings, and I felt obligated to treat their grief with respect but also to give a glimpse of the criminal mind.

So, what starts as a seeming innocent accidental meeting with a fragile boy, will later reveal his full potential for evil:

Again, he calls me, louder this time, which turns his voice into a sharp, rather unpleasant squeak. Startled, I turn around. This guy—no, not a guy exactly, rather a boy no older than seventeen—is running up to me, his t-shirt stained with perspiration, especially under those scrunchy arms.

His upper lip glistens with sweat. “You left your library card on the counter,” he says, handing it to me with a misshapen smile that hangs, quivering, over his chin.

He’s slightly shorter than me, which forces me to look down at him. “Thank you,” I say.

As I turn to go, he grabs my elbow, clamping it with a clammy hand. “Hey, can I carry your books for you?”

Do you plan the plot or let it evolve?

I definitely do not plan the plot, I let it happen and discover the twists and turns together with my character, which is essential for keeping a fresh sense of surprise. I place the character in a new situation and let her stumble over its obstacles with all the urgency of having to fight for survival.

Meanwhile, the sirens outside rise to an alarming peak. Through the window, I see the tires of three firetrucks grind to a halt near the curb. Within seconds, my entrance door pops open—but to get out, I’ll have to push my way through the firefighters, who are pouring into the place in helmets fitted with heat resistant eye-shields and goggles, extrication gloves, and boots.

They break open the entire wall, because the hole in it is too small for them. There, under the black puff of smoke, they discover Mrs. Gore’s body. By now, it is already charred. A couple of them load her remains on a stretcher, then carry it out. The rest start climbing up with thick hoses to douse the fire.

I don’t stay to watch it being extinguished, nor do I wait for first aid. I must get to school, must find the child, must save him.

Before it’s too late.

As an artist, you design your own cover. What inspired the cover for Overkill?

I was inspired by the moment Ash finds an access to a hidden room:

An hour later, the installer comes out again. “Miss?”

“Well, while nailing a new tackless strip in the closet, I took a back swing with the hammer and—quite by accident—hit the wall behind me. I expected to feel brickwork. Instead, I felt plasterboard, which cracked against my blow. I was pissed at myself—oh, forgive me! I should be more careful with my language around you, Miss.”

“Like I’ve said, I was angry with myself for the extra work I created. Then I noticed something behind the hole. So I knocked through and found a passageway to a spiral flight of stairs.”

I follow him into the closet, which is now full of swirling dust, and lean in through the hole, thinking this hidden space should have been obvious to me right from the start. After all, I could see a little window up there from the outside, but thought nothing of it.

There is a chalky taste in my throat, and the dust is clogging up my airways as I climb. The rises are high, and the industrial pole that holds the treads seems a bit unstable. Each one of them in turn clangs as I step up, higher and higher, but the sound soon dies away below me. The walls close in on me as it this is a trap. There is barely enough headroom and practically no light except at the top of the staircase.

By the time I reach it, my trepidation grows. Here is a narrow, barely lit room, with a tiny window looking out across the backyard. It has a distant view of Clearwater High School. I recognize it by the slightly curved facade of that building, although the slogan etched on it is too far to read, even if I squint. But I do know it. Home of the Tornadoes.

For a brief moment I consider turning this space into a new office. Finding it should feel great, should feel like adventure. Except for one thing. 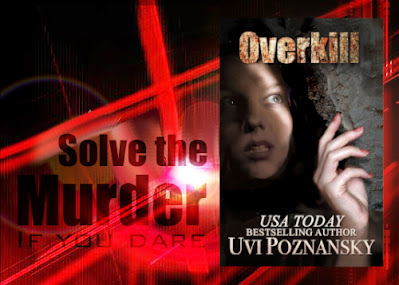 "Uvi Poznanski transports us with her stunning prose, well-rounded characters, and dialogue. The plot twists are complete surprises, and pull us on to see what's next. Nothing is what it appears to be, which is exactly what you'd want in a solid mystery thriller with a dash of romance."
~ J.A. Schneider, Author of Suspense and Psychological Thrillers

Posted by Uvi Poznansky at 8:12 PM